Issue 5 brings back second season one-shot villain Dr Somnambula aka The Sandman. The story, by Jeff Parker, is not bad, but not a stand out, either. The art by Ruben Procopio often veers into Mad Magazine territory, as this series occasionally does. Any old timers out there remember the Batman GAF View-Master set, and the artwork in the accompanying booklet?  It would be nice to get some art in that style.  In some panels, the art takes a "new-old-look" Irv Novick look, which I liked. Some nice touches are we learn Aunt Harriet's husband's name was Walt, and there is a shot of Gotham lifted directly from the animated opening credits of the series. The Sandman induced dream sequence takes on a trippy-psychedelic 1960s feel to it. On first reading, I did not catch any connection between this story, and Sandman's last panel cameo with Minerva in issue 2 and it seems doubtful that Minerva in that one panel was really supposed to be Sandman's African-American moll, Aurora, who appears in this issue. 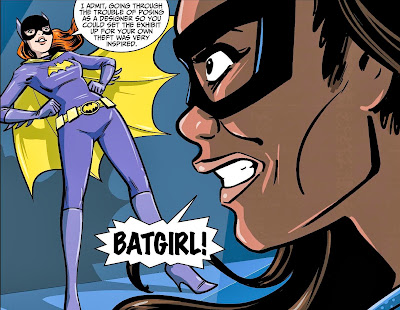 The second story brings back the TV version of Batgirl, who takes on the Earth Kitt version of Catwoman. Again, Jeff Parker's script is average. He gives no reason as to why there are two Catwomen in Gotham. There is an elongated fight scene that seems like filler material. The artwork by Colleen Coover is very fluid and good, and has an "Archie"/Dan DeCarlo look to it. However, her take on Chief O'Hara is inexplicably as a youngish, strapping redhead.

Overall, issue 5, while not the best, isn't the worst either. It earns a B-.
Posted by Shazamaholic at 9:42 AM