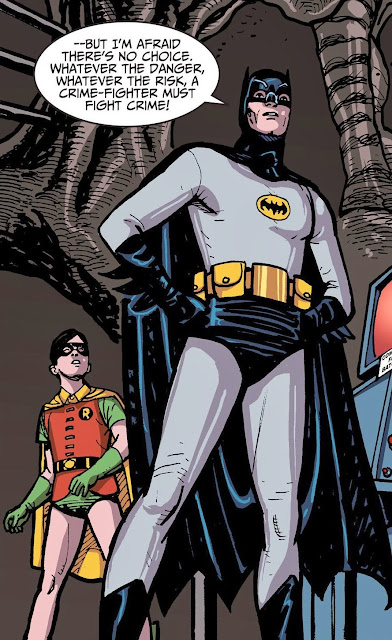 This issue changes thing up, with a new writer, Tom Peyer.  His script, featuring the Bookworm, is above average with some clever moments, such as the opening sequence where Robin is giving a lecture on literacy at the Gotham Chamber of Currency, chaired by millionaire Bruce Wayne.  The overall plot has to do with Bookworm compiling an Encyclopedia of Batman, in an attempt to deduce his secret identity. While Peyer's script is no masterpiece, the artwork by Ty Templeton certainly is.  He is clearly the best artist to work on this series.  His drawings perfectly capture the TV show likenesses while still embracing typical comic book grandness.  Only two critiques: his action panels are not quite as well laid out or as epic as Jonathan Case's, and he tends to give Batman a pronounced pot belly in some panels.

Jeff Parker is back writing the issue's second story, with art by Ted Naifeh.  As usual with most of these short second stories, its kind of a mess, reminiscent of bad third season episodes.  This one features Olga Queen of the Cossacks, in a lame plot to try to marry Batman, kind of a rehash of the TV show's Marsha Queen of Diamonds episode.  The art is OK but a little sloppy.  There is a non sequitur with Barbara Gordon hinting at a continuing storyline.  Overall the second story is weak.  Clearly, excellent short comic book stories can be done, as that was the norm of comics pre-1970, but today's creative talent can't seem to grasp it.  I'd rather see DC end the short second story, and have well done book length stories instead.  This issue earns a B, mostly due to Ty Templeton's excellent artwork.
Posted by Shazamaholic at 12:05 PM