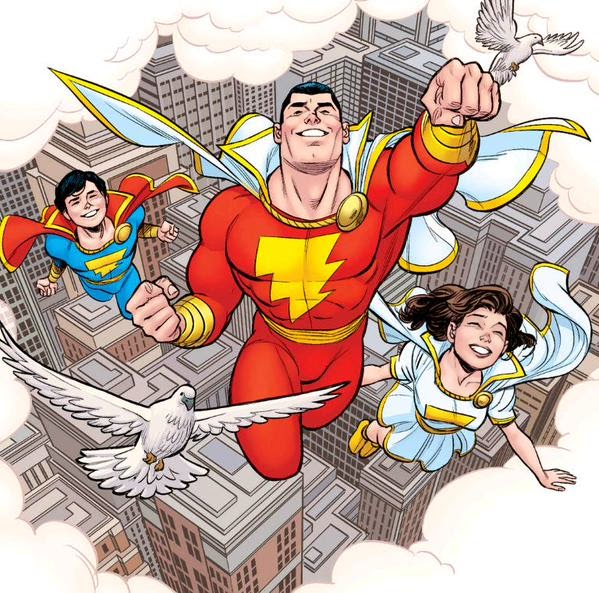 If you consider yourself a Captain Marvel fan in any way, shape, or form, you must buy and read "Captain Marvel and the Day That Never Was" in issue 1 of THUNDERWORLD ADVENTURES (and I really hope it becomes an on-going series).  This is the best DC Shazam book since Alex Ross' Justice.  And in some ways it is better, because at the end of the day, Justice was really a JLA story that had Captain Marvel in the spotlight for some perfectly crafted sequences. But the premiere issue of Thunderworld Adventures is a pure Captain Marvel story thru and thru.
Grant Morrison's script flawlessly captures both the Fawcett quality, and the E. Nelson Bridwell quality.  His script is clever and fun and superbly embraces the concept of alternate earths and time travel.  Morrison writes both Billy Batson and Captain Marvel perfectly.  This is the way both characters are meant to be.  A stark contrast to the meat head idiot Cyborg sidekick, the DCnU "Shazam" Geoff Johns' portrays in Justice League. Morrison gets in some nice, subtle shots at DC.  In one panel, there is a bank of monitors showing alternate earth Sivanas.  Front in center is one with a goatee and sunglasses, looking suspicioulsy like Captain Marvel's true number one enemy at the DC offices, Dan Didio.  Later, we see another alternate Sivana in a Hannibal Lector mask, obesseing over Mary Marvel, alluding to the Emo-Goth naughty Mary Marvel of the pre-Flashpoint New Earth... hmmm, Geoff Johns, perhaps?  We get to see Uncle Dudley, Mr Tawny, and the three Lieutenent Marvels.  And the Monster Society of Evil. Three of Sivana's kids, Magnificus, Georgia, and Junior, get Shazam-like powers, and the way Captain Marvel Jr defeats Georgia is one of the book's many highlights.  My only critiques of the story would be that Beautia wasn't included, and that the whole thing was just too short!  It could have and should have been at least ten pages longer.

Cameron Stewart's artwork matched Morrison's script perfectly.  He portrayed a style that was Fawcett influenced, yet modern. Every panel was art of the highest quality. My only critques would be that Mary Marvel's costume was white instead of the traditional red, and Stewart drew Freddy/Capt Marvel Jr with a kind of Beatle hair cut instead of an Elvis style more associated with the character.  All in all, I want Thunderworld Adventures to become an on-going series.  I want the upcoming movie to be inspired by this.  I want to see all future news items about the upcoming movie to use Stewart's artwork instead of the hooded DCnU artwork. Thunderworld Adventures earns an A+.
Posted by Shazamaholic at 12:28 PM