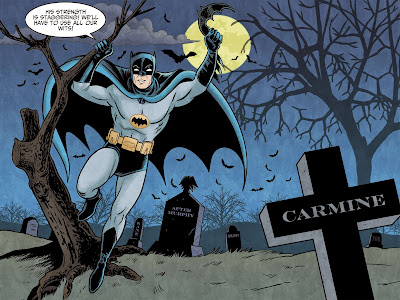 This issue presents two short stories instead of a book-length one.  First up is the introduction of Solomon Grundy into the 66 Universe. The script, written by Jeff Parker, has Marsha Queen of Diamonds' Aunt Hilda conjuring up one of Marsha's deceased husbands as Grundy.  Being a short story, it is fairly simple and straight forward, and to me, reminds me very much of the simple stories from the Batman coloring books of the era.  The art by Brent Schoonover is excellent, some of the best in this series, and is a homage to Carmine Infantino.

The second story, also written by Parker, has a lot more to the narrative. It establishes the secret origin of False Face: none other than Basil Karlo, the original comic book Clayface from the 1940s. It turns out False Face didn't wears masks. He ingested a serum that allowed him to morph into anyone one he willed. In hot pursuit of False Face in a swamp area, he ingested an altered version of the serum that radically changed him into the Matt Hagen version of Clayface from the 1950s comics.  This story alludes to a new trophy area in the Batcave, which includes a Joker playing card and a giant penny. The art, by Giancarlo Caracuzo, is good, but a notch below Schoonover's work. This issue earns a B.
Posted by Shazamaholic at 10:49 AM