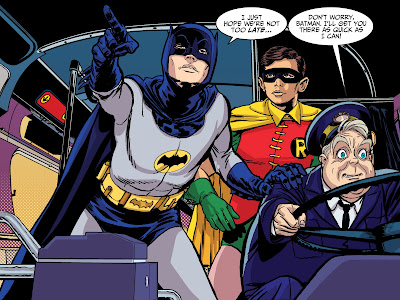 This issue, written by Ray Fawkes, is an enjoyable issue despite the use of one of the weaker made for TV villains, Marsha Queen of Diamonds. Actually, the script for this issue is, in fact, superior to Marsha's debut episodes. The plot deals with Marsha using a hypnotic reflection diamond to brain wash millionaires into falling in love with her, and giving her their riches.  Bruce and Dick attend a millionaires' event to scope out the crimes, but Dick gets an eyeful of the hypnotic reflections. As Batman and Robin chase Marsha in the Batmobile, Batman notices Robin has removed the Batmobile's diamond-studded brakes to give to Marsha.  This causes a terrific death trap (and resolution) inspired more by old cliffhanger movie serials than the TV series. An amusing scene is when Batman and Robin need to take a bus to Commissioner Gordon's house.  The art this time around is by Jon Bogdanove, who over all does an excellent job. There are a few panels that have a near photographic reproductive look to them, similar to an effect Neal Adams used to do in the early 1970s. Not as well done, in contrast, are a few other panels that take on a Mad Magazine caricature look.  All in all this was an excellent and enjoyable issue, and earns a solid B+.
Posted by Shazamaholic at 11:47 AM