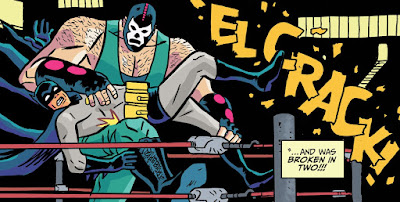 This issue continues the trend begun in issue 25 of fast tracking modern Batman characters into the 66 universe, this time Bane. As with the previous two issues, this issue is lacking. Readers of this blog will note I have lamented that the main villain of the 66 universe, The Riddler, has not been utilized much in this series. Writer Jeff Parker finally brings the Riddler back, but in a very haphazard way. Our first view of him is with John Astin's likeness, proven to be merely a mask.  From there, Bane is worked into the plot as a Mexican wrestler in what can be best described as a sequel to the third season episode "Ring Around The Riddler". I just don't understand Parker's determination to base this series on the extremely weak third season (and a good helping of Schumacher). Its almost to the point I'm ready to throw in the towel on this comic, but DC beat me to it, announcing that this series has been cancelled, with issue 30 slated to be the finale with at least two Batman '66 miniseries slated to take its place (Batman '66 Meets the Avengers and Batman '66 Meets the Man from UNCLE). There has to be a shake up in the spin off miniseries, bringing it back to the first season roots, and I doubt Parker is the guy to do it.  Also, this issue continues the trend of weak, sloppy, and rushed-looking artwork, this time by Scott Kowalchuck.  This issue earns a D.
Posted by Shazamaholic at 11:34 AM