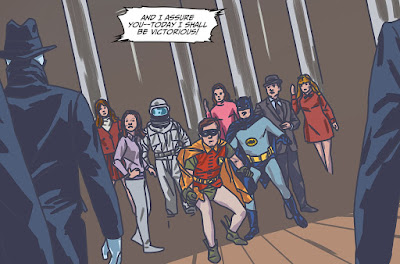 The final issue picks up with the Cybernaughts, who look like Marmaduke Ffogg's crime school cuties, attacking our heroes. Miss Gough also apparently throws her two cohorts, Ffogg and Mr Freeze, under the bus as the Cybernaughts attack them also. There is a little more flirting between Robin and Mrs Peel. Batman makes a reference to The Shadow, and helps Freeze, whose suit is damaged by one of the Cybernaughts. The heroes, with Ffogg and Freeze, escape only to find even more Cybernaughts waiting for them. Then the plot twist (SPOILER ALERT): the computer program controlling the Cybernaughts is actually the digitized brain waves of its creator, the disembodied head of  Professor Armstrong.  Miss Gough is actually his daughter... but it turns out she's really a Cybernaught herself.  Upon learning she really isn't human, she electrocutes herself, short circuiting the brain wave computer.   Batman and Robin then get to meet the Queen before returning home.

Written by Ian Edginton, the first 2/3 of this issue, like the previous issue, seems repetitive, further illustrating how a 4 issue miniseries would be much more appropriate than padding it to 6 issues. Then the last 1/3 crams in all these plot twist and revelations. Matthew Dow Smith again turns in amazing art.  Overall the final issue earns a B-.
Posted by Shazamaholic at 11:03 AM