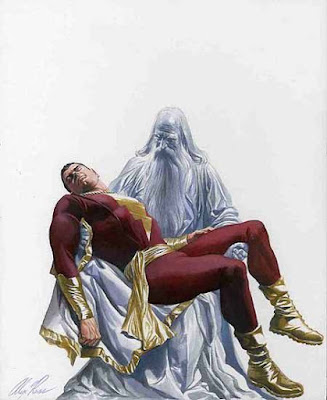 On January 19, 2017, The Hollywood Reporter broke the news of what went on during those meetings between Dwayne Johnson, Seven Bucks Productions, and DC:  Black Adam will get his own solo movie, which will have priority over the Captain Marvel movie. It is speculated Beau Flynn has jumped on as a producer and Johnson's recurring collaborator Brad Peyton will be announced to direct the film from a reworked and rewritten version of Darren Lemke's script.  I knew it was time to worry when it was revealed Geoff Johns was in on the meeting. Black Adam is sure to go on to be a major player in the DCEU, as Johnson has often hinted at Black Adam's arc going from slave to superhero to villain to anti-hero.  Things started to solidify when Johnson's manager Dany Garcia made comments about insuring the Black Adam character be developed perfectly, and then a social media pic of Johnson with Garcia's other client, Henry Cavill, sharing a New Year's drink, sent the internet in a frenzy of a Superman-Black Adam showdown.

But what of Captain Marvel? It was announced Henry Gayden has taken over as script writer for the World's Mightiest Mortal movie, and that Black Adam will be mostly absent from the film, if he appears at all.  Optimistically, Sam Raimi may still be in play to direct, and Alex Ross brought on as creative consultant.  I'd like to see the neophyte Gayden teamed up with a seasoned writer, like perhaps Dan Schneider (Henry Danger).  This is a great development in that Dr Sivana (who was missing in the rejected John August script) and Beautia will be the main antagonists, with possibly an appearance by Ibac, who was Captain Marvel's evil counterpart in the original Fawcett comics rather than Black Adam.  And, of course, without Black Adam hogging the spotlight, the focus will surely be on Billy Batson and Captain Marvel, and we should have plenty of screen time to develop their characters properly. But pessimistically, and more realistically, the Captain Marvel movie may continue to hit roadblocks and be pushed back, until the decision is made that Black Adam can fill Captain Marvel's role in the bigger DCEU, and the Captain Marvel movie is finally and officially cancelled. I kind of see it going that way.  Considering how divisive and poorly the DCEU has performed to date, it may actually be a blessing in disguise that Captain Marvel sit it out. Besides, if Geoff Johns has any say, and it looks like he does, they would probably give us New 52 Shazam instead of Captain Marvel, and I really don't want to see that.  Stay tuned for the official announcements.
Posted by Shazamaholic at 3:42 PM