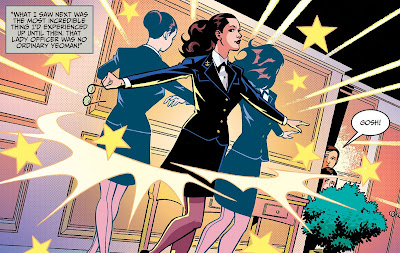 The first issue of the latest Batman '66 miniseries sees the return of writer Jeff Parker and artist David Hahn, with new writer Marc Andreyko (from the Wonder Woman '77 comic book series), as Batman encounters the Lynda Carter version of Wonder Woman.  The story begins with Catwoman III hired by Talia and Ra's al Ghul to steal a book.  The Dynamic Duo apprehend Catwoman III, but Talia escapes with the book.  Batman and Alfred then recount for Robin how, some 20 years earlier during World War II, Bruce first encountered a younger Talia and her father during an auction in which that same book was present. Also at the auction were Col. Steve Trevor, Yeoman Diana Prince, and Etta Candy.  After Nazis crash the party and steal the book and its sister volume, Diana turns into Wonder Woman, witnessed by Bruce and Talia, and comes to the rescue.  Bruce is able to sneak the targeted books out to safety, only to find Talia's father is not one of the good guys.  The script is impressive in the way it works in the WWII era Wonder Woman from that show's first season, by the flashback to 20 years earlier.  As such, we get a good glimpse of a young Bruce Wayne, Adam West style.  At first, I felt including Ra's al Ghul and Talia was another attempt to force the 66 Universe into conforming into the standard, generic DC Batman (something Parker's scripts seem to have a lot of, in contrast to other writers in this franchise), but upon thinking about it, there really isn't any other villain that would work considering the 20 years of time sweeping this plot. The art is good, but on the generic side.  After Matthew Dow Smith's epic artwork with picture perfect likenesses in the previous miniseries, anything else is going to pale in comparison. There were some online reports that Ra's would be drawn in Christopher Lee's likeness, and Talia in Caroline Munro's likeness, but Hahn only gives the barest hint of that possibility, opposed to Dow Smith, who would have been far more definitive.  One thing in Hahn's favor is he gets the "comic book" style of action and motion better.  Dow Smith, for all his art's beauty, didn't quite nail that, perhaps being too slavish to the concept of live actors on a limited sound stage.  This first issue earns a B+.
Posted by Shazamaholic at 11:18 AM