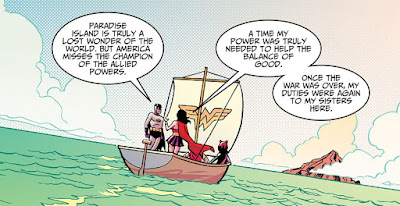 This issue starts with Batman, Robin and Catwoman flying to Paradise Island.  Even though Catwoman III (Eartha Kitt) was featured in issue 1, it is Julie Newmar's Catwoman that appears here with no apparent explanation. Catwoman is being brought along because men visiting Paradise Island need a woman chaperone.  Wonder Woman, in her invisible jet (even though last issue had her flying on her own power) meets the Batplane in the air to guide them in.  The next few pages are the Dynamic Duo and Catwoman getting a guided tour of Paradise Island.  On second look, David Hahn's art is so vague, this might actually be the Lee Meriwether Catwoman. Batman informs Wonder Woman of the stolen book, and she laments she should never have left Man's world. They get a report of an attack and the four head off in a small sailboat. The sail has the modern Wonder Woman emblem on it, a tiresome Jeff Parker trademark of forcing the 66 Universe to conform to modern, generic DC continuity.  Upon hitting land, Batman makes a reference to Catwoman being set up in issue 1.  So wait, this is all the same Catwoman?  I'm getting confused. They enter a maze only to find a mythological griffin.  Meanwhile, on the other side of the maze Talia and a feeble Ra's al Ghul are entering.  Wonder Woman fights the griffin, as Robin and Catwoman meet a cyclops. Wonder Woman uses the "speaking to animals" power from the previous issue to tame the griffin.  She then rescues Robin from the cyclops as Batman rides the flying griffin.  Things are getting very trippy, as red hearts float around Robin's head whenever he looks at Wonder Woman. They get to the center of the maze, where Ra's enters the Lazurus Pit, and exits restored to health and strength.  Jeff Parker and Mark Andreyko turn in a bizarre script riddled with inconsistencies and contradictions. Likewise, David Hahn's art seems very rushed and is weaker than his usual efforts.  It is issues like this that make me wish DC would do the right thing and bring in Andy Fish onto the Batman 66 franchise. This issue earns a C-.
Posted by Shazamaholic at 11:33 AM