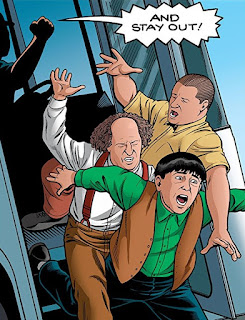 The latest issue of American Mythology's rather randomly scheduled Three Stooges comics features only one new story and one reprint.  The new story, "The Brothers Dim", has the boys reeking havoc at a Renaissance fair.  The Stooges believe they have actually gone back in time. The script by S.A. Check is average, but its the art by Brendan and Brian Fraim, who turn in another excellent job, that saves the story.  The reprint, "The Duped Deputies", from the August 1961 issue of The Three Stooges, like all the other reprints in this current series, has weaker and crude artwork, but actually a stronger script than the new story.  The boys are gunslingers in an old west town, and get deputized to stop a bank robbery. All in all, this issue earns a B. It is rumored this is the final issue.  Hopefully that is not the case and there will be more issues published sometime in the near future.
Posted by Shazamaholic at 4:09 PM