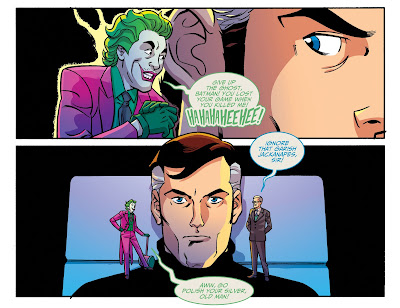 This issue time jumps to 1977, and opens with Wonder Woman thwarting a heist by Killer Croc. It's revealed Barbara Gordon has replaced her father as Police Commissioner, and Chief O'Hara's never-before-mentioned daughter replaced him as Police Chief. The three women of law and order discover a clue that the League of Shadows may be back.   Wonder Woman asks Barbara to summon Batman, to which she replies Batman retired and Robin has taken his place ....as Nightwing.  OK, stop.  If you go back, since the beginning, I specifically asked DC not to have the 66 Robin become Nightwing. Unfortunately, I saw it coming with Jeff Parker's obsession to graft modern generic DC continuity onto the 66 Universe, the Nightwing thing was inevitable. But actually seeing it, it removes all uniqueness from the 66 Universe. This is no longer the 66 universe, it's just another kid-friendly remake of the standard generic DC continuity. As such, with this issue, the Batman '66 franchise is officially an utter failure. Canonically, this just doesn't work because of the 1979 Legends of the Superheroes specials, where Bruce is still active as Batman and Dick is Robin two years after this part of the miniseries takes place.  To continue with the review, Wonder Woman enters Bruce's study at Wayne Manor, where he is brooding over a photo of his father, which again, is out of step with the 66 Batman.  Bruce has graying temples... which Adam West did not have in 1977.  Anyway, Bruce and Diana embrace and go to the Batcave, where he explains The Joker became more deadly, discovered Batman's identity, invaded Wayne Manor, where Alfred died of a heart attack, and Bruce killed the Joker, thereby retiring as Batman. Diana tries to talk him into becoming Batman again, but he tells her to work with Nightwing. She meets up with Dick, who apparently has teamed up with a reformed Catwoman. The three brainstorm on figuring out Ra's plan at the disco Catwoman owns, while Bruce in the Batcave gives in to the urge, and also deduces the plan.  Once they have figured out Ra's is looking for the location of three Lazarus Pits, Talia emerges to kill Catwoman while Ras' emerges in the Batcave to kill Bruce. In all honesty, if this issue were a standard, generic continuity Batman story, it would be average.  But as a Batman '66 story, it betrays too much of its source material, and is a failure. This issue earns an F.
Posted by Shazamaholic at 10:38 AM

Hmmmm I am somewhat surprised that your hating this crossover. While I agree that its not the best that Batman 66 has provided us over the last few years. I still think its an okay story at least.

Though I do see where your coming from.