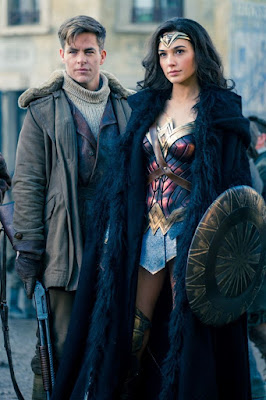 The DC Extended Universe finally gets one right, and it took a Wonder Woman to get it done.

The original Wonder Woman comics were set during World War II, but the decision was made to set the cinematic version in World War I. Perhaps because this year is the 100th anniversary of America entering the "war to end all wars", or more cynically, so that the film wouldn't be identical to Captain America: The First Avenger. But if the latter is the case, why was Wonder Woman given a shield, which she traditionally never had in the comics? Incidentally, by setting the film during WWI, the DCEU establishes Wonder Woman as the first superhero of this continuity, and the center of superherodom. This is what Captain America is in both the Marvel comics and cinematic continuities, and what Superman is in most versions of DC comics continuity (the main exceptions being the post-Crisis continuity where the Justice Society related heroes were established in the 1930s and 40s, while Superman became the first of the second generation of heroes, and in the current New52/Rebirth continuity where it is established both Batman and the Hal Jordan Green Lantern went into action prior to Superman).

In any event, director Patty Jenkins uses the template established by Richard Donner in Superman, and perfected by Sam Raimi in Spider-Man.   Act I is Paradise Island, and sets up Diana's back story.  We see her as a little girl, who is quite the war monger, seeing it as all adventure and excitement. Queen Hippolyta tries to discourage Diana's interest in battle, but one of the other amazons, Antiope, begins training her in secret.  Hippolyta tells Diana she was sculpted from clay and brought to life (the traditional origin story), but here it seems presented as a fairy tale for a child, and sure enough, subsequent dialogue between the Queen and Antiope reveal Diana is not what she seems.  In all honesty, this opening part of the film drags a bit.  It's a necessary sequence, but it lacks something.

Things pick up in Act II which has Steve Trevor, played with charm and humor by Chris Pine, crashing onto Paradise Island, followed by pursuing Germans, which result in the film's first battle scene. Steve makes a connection with Diana, and tells the amazons about the World War going on outside the confides of their hidden island. Diana desperately wants to go fight the bad guys, but her mother forbids it, eventually giving in and letting her daughter go. The banter between Steve and Diana is one of the film's highlights.

Things pick up even more in Act III, which is Steve and Diana arriving in London to fight in the war, giving Diana some fish-out-of-water moments. By setting the film during WWI, there is a chance to give this part of the film a steampunk look, although I don't think Jenkins fully realized the visual potential.  It is nice to see a classic character like Etta Candy brought into the proceedings. We see Diana and Steve's adventures ranging from attending an armistice meeting, to liberating a small village behind German lines, to the climatic battle where Steve gives the ultimate sacrifice. 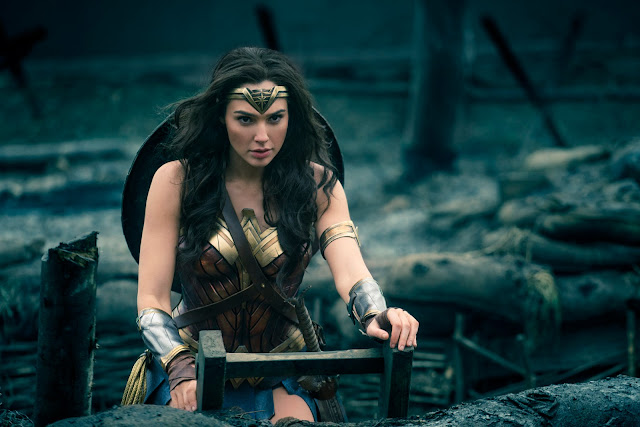 Gal Gadot returns to the role of Diana Prince which she first portrayed in Batman v Superman: Dawn of Justice, where she was the one of the few bright spots, and that film's MVP, portraying Wonder Woman as a strong and silent mystery woman. In this outing, Gal's acting is somewhat limited, but effective. To her credit, she has nothing as cringe worthy as Ben Affleck's unintentionally hilarious screaming of "MARTHA!!!".  Here, she portrays Diana as naive, and ever so slightly dim-witted in a very endearing way. If there were a "best smile and/or pout in a motion picture" category at the Oscars, Gadot would win by a mile. As Diana experiences wartime battles throughout the film, Gadot conveys losing the love for war Diana has held since a child, when war was more of a fantasy for her than reality. In the action scenes, she struts through the battlefield as if it were a runway.

Chris Pine's Steve Trevor is the glue that holds this movie together. In many ways, he becomes the focus of the film, while Diana becomes more of a device. The heart of the film could be a flip flop of the old saying "behind every great man is a great woman" to "behind Wonder Woman is a noble and heroic man".

Surprisingly, there are no cameos from any other superheroes, although Bruce Wayne is referenced in the modern day bookends to the film.

Of note is that this is the second movie where Wonder Woman appears, yet the name "Wonder Woman" has not been uttered in any dialogue. There is now no excuse for Captain Marvel to be renamed Shazam in his upcoming movie. If DC is irrationally fearful of using the name Captain Marvel, then no name should be used, and the actor can be credited as playing the role of "World's Mightiest Mortal", which should also be the title of the film.

What hurts this movie a bit is that there is no real major villain.  Dr Poison is relegated to laboratories for most of the film, while General Ludendorf is more or less a generic military bad guy.  Only at the end does Aries show his face, little more than a MacGuffin for the film's action finale. Likewise, the film suffers from some poorly done, primitive looking CGI.

The DCEU seems on the verge to be a woman dominated franchise, as Wonder Woman joins Margot Robbie's Harley Quinn as the two best portrayed and realized characters in the DCEU movies.

Wonder Woman is the best of the four released DCEU franchise movies, although it doesn't quite stand up to the real superhero classics like Donner's Superman, Tim Burton's two Batman movies, Sam Raimi's first two Spider-Man movies, or Christopher Nolan's The Dark Knight. Wonder Woman is equal to the best of the MCU offerings, with the possible exception of the excellent Captain America: The Winter Soldier.   Many fans are elated with this, but considering where the DCEU could have and should have been at this point, is it really something to celebrate, or another reason to be discouraged and frustrated with the DCEU?
Posted by Shazamaholic at 12:06 PM