As most of my readers know, I was somewhat critical of DC's Batman '66 series, in that I felt it followed too much in the footsteps of the awful third season, and did not try hard enough to capture the spirit of the excellent first season. I was also very vocal about DC getting comic book artist-writer Andy Fish, who is a 1966 Batman fan who sees the series much as I do in regards to what worked, and why it went off the tracks, to work on the comic book version. Well, so far, DC hasn't wised up yet, but Mr Fish is posting his own independent Batman '66 prequel, Sinister Sideshow of Dr Scorpio, which can be read on several platforms, including batmanbyandyfish.blogspot.com.

Set in 1964, Dick Grayson has just become Bruce Wayne's ward, and it looks like Batman is new to his crusade against crime.  One of the best surprises so far happens in episode 3, where it is revealed Captain Marvel is Gotham's pre-Batman protector. 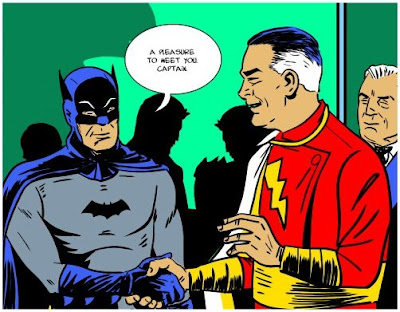 Andy, who is also a superhero serial buff (and as an aside, also be sure to check out his serial inspired 1940s take on Batman, The Death Ray of Hugo Strange which can be read at the same website), has based this take on Captain Marvel on the 1941 serial, which explains how he is a bit older, and has been in action before Batman.  He appears to be drawn as a combination of Tom Tyler and Fred MacMurray.
I am looking forward to see how the relationship between Batman and Captain Marvel develops. I would like to see an actual DC comic book series with this premise. Considering how Inspector Basch was set up in the pilot episode to be a recurring character that never panned out, I am curious to see if Andy will give a backstory to that character. I can't wait to read more chapters and I urge all the readers of this blog to check it out.
Posted by Shazamaholic at 1:51 PM