According to The Hollywood Reporter, the role of Captain Marvel (or Shazam II, depending on who you ask) has been cast.  Zachary Levi won the role.  He is someone I never considered, and seems to be a choice out of left field. Such a casting strategy hit it big back in the 1980s when Michael Keaton was cast against type as The Batman, so hopefully this too will capture lightning in a bottle, if you pardon the expression.  According to Umberto Gonzalez, the other four finalists for the role were my top choice Derek Theler, plus Zane Holtz, Billy Magnussen, and Jake McDorman. We should be getting other casting news soon, and hopefully confirmation if this indeed will be a Captain Marvel movie, or a Curse of Shazam movie. David F. Sandberg has said on a couple occasions, of the two camps of fans, the classic Fawcett fans, and the Geoff Johns/Curse fans, one camp will be disappointed in the movie. 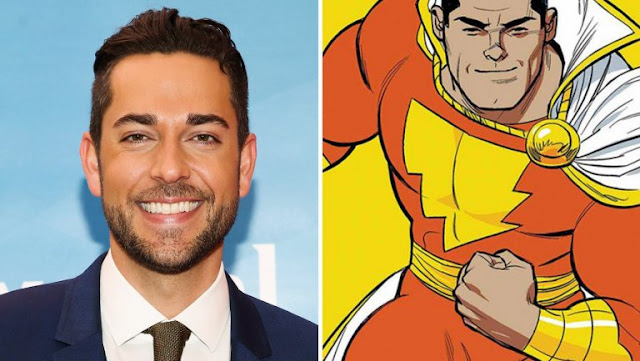 UPDATE:  Levi posted a statement where he calls the character Captain Marvel.

Honored and greatly humbled to be a part of the #dcuniverse by bringing the original Captain Marvel to life. I am beside myself with gratitude, not only for this opportunity, but also the incredible outpouring of love and support from so many of you out there in the world. Now if you’ll excuse me, I’ll be in the gym for the rest of forever. 🙏 (amazingly cool art courtesy of @bosslogic) #Shazam
A post shared by Zac Levi (@zacharylevi) on Oct 28, 2017 at 9:37am PDT


UPDATE: On October 31, 2018, it was announced Dwayne Johnson's Black Adam movie has hired comedy writer-producer Adam Sztykiel to pen the script, leading to speculation it will have a comedic tone, like Johnson's recent projects Baywatach, Jumanji, and Central Intelligence.

Posted by Shazamaholic at 10:26 AM