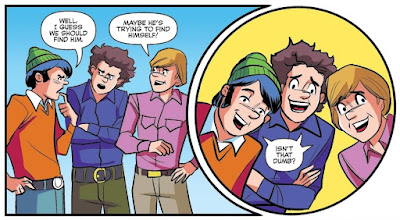 Issue number 4 of The Archies features The Monkees.   Written by Alex Segra and Matthew Rosenberg, the plot deals with Archie who, during a gig with his band, gets knocked out and dreams about an adventure with The Monkees.  Davy is kidnapped and The Archies tag along with Mike, Micky and Peter to rescue him. Being a dream, the typical surreal, meta humor of The Monkees TV series fits into the narrative, laced with Monkees trivia and call backs. This includes the Monkeemobile, the Monkee's pad, the Monkees using their "Monkeemen" superhero guise, as well as the Archies donning their 1960s superhero costumes.  Also a character named Tony Tunes alludes to Don Kirshner. I don't know if it was intentional or coincidence, but as Davy is kidnapped in the story, much of the action focuses on Mike, Micky and Peter.  In real life, Davy passed away in 2012.  Joe Eisma is the artist of this issue, and does something clever.  The bookends are drawn in the current realistic Archie style, but the dream sequence reverts to the classic Archie style. My only critique of the art would be that Eisma didn't really capture the Monkees' likenesses in the interior art. They all seem to have the same generic face and the only way to tell them apart is by their hair. His cover art gets the likenesses better, as do the variant covers by Greg Smallwood, Mike Allred, and Tyler Boss. Overall, this is a very enjoyable issue and earns an A-.

Posted by Shazamaholic at 11:05 AM