Character breakdowns from the Shazam! movie have surfaced.

BEAUTIA SIVANA – “Sivana’s devoted daughter. When he does not return her love, she changes loyalties and helps Billy out.” Supporting Lead Female

SHAZAM – “Elderly wizard who is forced to give his powers to a young boy before the boy is ready.” Supporting Lead Male 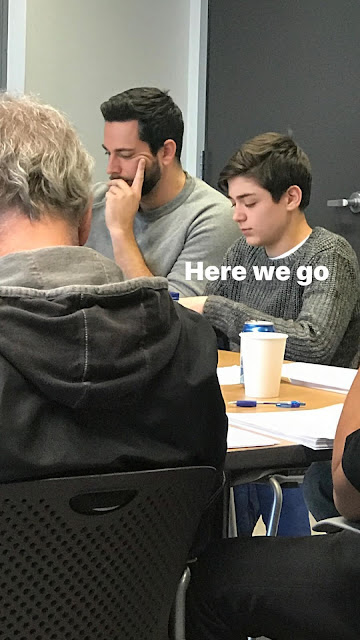 It is interesting to see Sivana will be a sorcerer and not a mad scientist.  But I am happy to see Beautia is confirmed to be in the film, and seems to be very faithful to the Fawcett original. It is also interesting to see Shazam is "forced" to give his powers to Billy "before he is ready".  It seems there will be generous liberties taken with the characters.  Many are jumping to the conclusion the "mysterious man" may be Black Adam, but to those of us who are long time Captain Marvel fans, it seems obvious the character is the stranger who summons Billy to board the mystery train that takes him to the Rock of Eternity.  Since filming begins in just a couple weeks, all these roles are most likely cast, although are being kept under wraps. A photo reveals Zachary Levi and Asher Angel at a table reading of the script in Canada where filming will occur.

UPDATE: David F. Sandberg debunked the character breakdowns, adding "Sivana is definitely not a reanimated sorcerer".
Posted by Shazamaholic at 11:22 AM