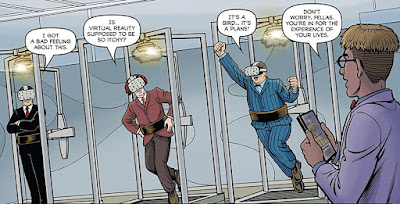 The latest issue of American Mythology's series of Three Stooges one-shots is once again by the standard team of writer S.A. Check and artists Brian and Brendan Fraim.  The first story has the Stooges entering the world of virtual reality. Even though it includes a cameo by Shemp, this type of "modernizing the Stooges" formula just does not work, and this story falls flat.  The second story has the boys as window washers on a skyscraper, and fares much better.  This story is classic, entertaining, and funny.   The issue's third story is a vintage reprint written and drawn by Moe's son-in-law Norman Mauer, featuring Shemp as the third Stooge, and is top notch. Overall, this issue earns a B-.
Posted by Shazamaholic at 4:10 PM