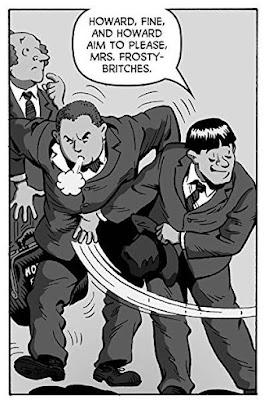 The latest Three Stooges comic book from American Mythology features a change in format. The scripts are written to be more in line with the classic two reel shorts and the art work in toned in black & white.  The reprints are also reduced to single page strips.  The issue's two new stories, both written by Mike Wolfer are top notch.  He captures the tone, the characterizations, and the humor of the classic shorts perfectly.  Best of all, unlike some of the previous issues which seemed to be influenced by the Farrely Brothers movie, there is not a bunch of pop culture references to hit the reader over the head that this is 2018.   A good interpretation of the Stooges should be timeless.  There doesn't need to be an aggressive attempt to scream "hey, this is 2018", nor to scream "hey, this is 1938".  Just write the characters faithfully and put them in funny situations and don't worry about what year its supposed to be.  Wolfer succeeds with that in this issue. The premise  of the first story has the boys as exterminators who are mistaken for pastry chefs at a swanky party.  The second story's premise has gangsters hiring the boys to take them on a tour of a swamp where a scientist inventor is secluded. The artwork is by Eric Shanower, who with Jeremy Kahn's black and white tones, captures the atmosphere of the classic shorts. Shanower's renderings of the boys looks like it is more influenced by Norman Maurer's artwork from the '40s and '50s.  A bit more cartoony than the Fraim brothers artwork in previous issues, at least in regard to the Stooges, while other characters have a more realistic rendering.  Hopefully the Fraim brothers will get an opportunity to draw an issue or two in this new format.  Overall this issue earns an A+.
Posted by Shazamaholic at 12:09 PM