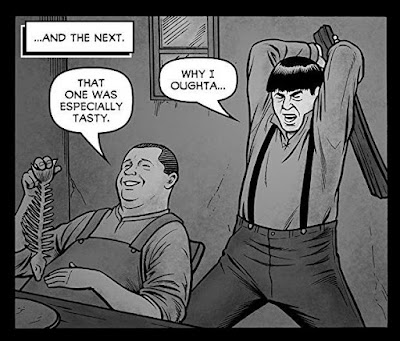 The latest issue of American Mythology's series of Three Stooges one-shots is also the third Halloween special.  S.A. Check is back writing after missing the previous issue (and this may be his swansong, according to the not-quite-clear-as-mud intro on the inside back cover), and the Fraim Brothers are back at the art chores, but this is still in the new format begun in the previous issue of gray tones in place of color.  The first story is a bit of a send up of "The Raven", and works okay for what it is.  The second story is the third installment of the Frankenstooge saga that has become a tradition in these Halloween specials.  It, also, works okay for what it is.  Needless to say, the Fraim Brothers turn in glorious artwork as usual.  It is curious to note these two new stories are rather short, and it's the 1966 reprint that takes up half the issue.  Also the reprint is in black and white, even though it was originally published in color.  While I like the gray tones of the new stories, I'm less enthusiastic to see the originally color stories reprinted in a cruder Xerox-like form of black and white.  Overall this issue earns a B.
Posted by Shazamaholic at 3:00 PM