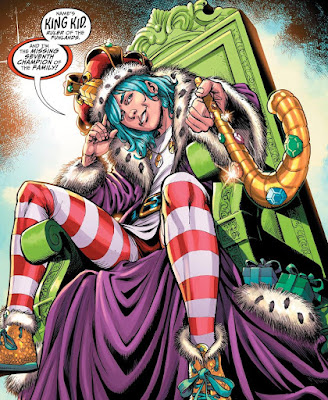 This issue opens with the Vasquezes suspicious about the man who claims to be Billy's father, continuing the final scene from the previous issue.  Cut to the kids in the Rock of Eternity, debating if they should explore the Magiclands. They decide to go to Funland, despite Mary's protests. We then cut to Dr Sivana, waiting to see a medical doctor, as he is infected with Mr Mind.  Back to the kids, on the train, they arrive at Funland and are met by a talking clown doll. Funland appears to be "Disneyland on steroids", and we get the very first "Holy Moley" from Billy in this continuity (prior to this, Johns attempted to make "badass" Billy's catchphrase during Curse of Shazam and his appearances in Justice League). The kids pair off to explore.  Back to Sivana in the doctor's office.  Mr Mind tells him to take the doctor's tongue for a magic spell.  Back to the kids, enjoying the amusement park.  Billy and Freddy observe a suspicious incident where an adult is running away from a child.  Then they meet King Kid, who looks like he stepped out of an old Sid & Marty Krofft production.

Geoff Johns' script is kind of trite, and this issue reads almost like a filler. The art is by Marco Santucci, who, like Dale Eaglesham last issue, turns in a good yet generic job, although Santucci's art is a little more polished.  If I had my druthers, I would prefer Mayo "Sen" Naito be the series artist, as her artwork from last issue's back up story showed far more charm and character that would better embellish Johns' underwhelming scripts.  This issue earns a C-.
Posted by Shazamaholic at 9:22 AM

Good review. Are you going to do posts on the Shazam mini trailer and a Aquaman film review?

I did see "Aquaman", and I enjoyed it, but I just didn't feel inspired or motivated to write a review of it. I will say, I thought it was equal to "Wonder Woman".