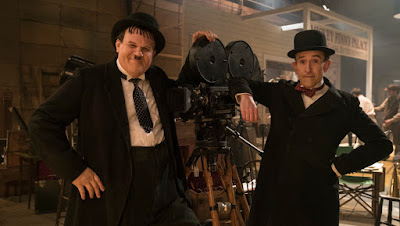 This dramatized biographical film, directed by Jon S. Baird, stars Steve Coogan as Stan Laurel, and John C. Reilly as Oliver Hardy, telling the story of the famous comedy team's final bow on a tour of the United Kingdom in 1953.  The film opens in 1937, on the Hal Roach lot, of the team filming their movie Way Out West, to introduce the characters and set up the story. Roach has the duo signed to separate, staggered contracts, which limits their power of negotiating. In this scene I quickly noticed a mistake.  On the Roach lot, there is a poster of the Little Rascals.  The "Little Rascals" name did not exist at that time.  It was a title created for the films' TV syndication in the 1950s.  The series was originally titled Our Gang Comedies and the group of kids were billed as "Hal Roach's Rascals", although by the mid 1930s, both the series title and the group of kids were streamlined to simply "Our Gang".

We skip ahead to 1953, and the team, despite failing health, embark on a tour of the United Kingdom in hopes to get financing for one more movie. There is heart, humor, and a bit of drama.  Coogan and Reilly do a magnificent job portraying Mr. Laurel and Mr. Hardy, and one of the highlights of the film is to see these guys doing comedy bits off stage in "real" life, not so much for the entertainment of others, but for their own amusement. The film also portrays their wives, played by Shirley Henderson and Nina Arianda, as an entertaining comedy team in their own right. One thing I find unique about Laurel and Hardy is that they were not an "organic" comedy team, like The Marx Bothers, The Three Stooges, or Abbott and Costello.  Much like The Monkees are considered a "manufactured" band, Laurel and Hardy were a "manufactured" comedy team, put together by Hal Roach.  And like The Monkees, it was the right combination that resulted in magic.  This movie is well made, and it shows on the screen. This film is in limited release, but if you happen to have in playing in your town, be sure to see it.
Posted by Shazamaholic at 3:24 PM