The 3rd issue picks up at the Funlands with a celebration for Billy and his family.  King Kid reveals his mission as appointed by the council of wizards to run this amusement park for troubled kids from the seven realms.  Everyone is having fun except for Mary, who is very suspicious of the whole situation.  King Kid claims to be the seventh champion (there needs to be one for each of the seven realms), and almost tricks Darla -whose Crank Yankers' "Special Ed" personality is in full force- into revealing the magic word. Luckily Mary stops her.  King Kid tells his origin story in an attempt to earn Mary's trust. In summery, he ran away from a cruel home, found a magic wishing stick, and created the Funlands.  King Kid continues to push to be accepted as part of the Shazam Family.  The three Flashpoint kids are willing to accept him, but Mary still isn't sold. King Kid becomes agitated when he finds out Mary is an adult, i.e. almost 18, and has his clown henchmen attack the kids, sending Mary, Freddy and Darla into an underground shaft. The other three turn into Captain Shazam, Asian Shazam and Latino Shazam, and King Kid seems very outraged that the champions are in adult form.  Captain Shazam is quickly overpowered and sent to the shaft.  Asian Shazam and Latino Shazam get sucked into the Gamelands.  Freddy and Darla, meanwhile, end up in the Wildlands... a land of talking humanoid felines. 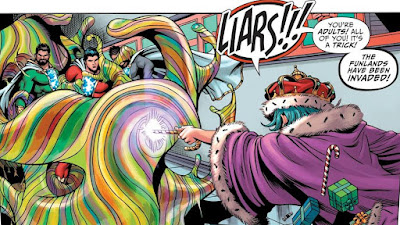 Geoff Johns' script is, intentional or not, kind of on the childish side, where he's essentially put these characters into a Hasbro Candyland world. The whole grim and gritty thing didn't work out in Curse, so now he's trying to turn the series into a Nicktoons-inspired kids book, without realizing that an all-ages concept has already been done so much better in the Billy Batson and the Magic of Shazam series.  The artwork is all over the place, with Dale Eaglesham and Marco Santucci in tandem handling most of the issue, with Mayo "Sen" Naito (who really should be the main artist on this series) handling the King Kid origin sequence.  Over all, this issue is par for the course earning a C.
Posted by Shazamaholic at 10:05 AM