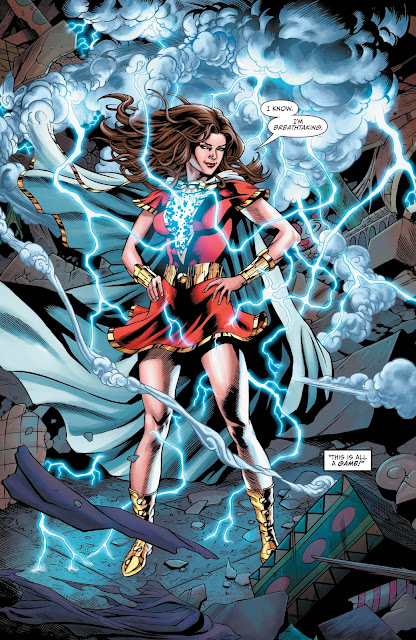 This issue picks up with Black Adam being the adult in the Rock of Eternity as he deduces how the kids have screwed up by going to the Magic Lands, albeit a cruel adult who reasons he must destroy Billy Batson "before it's too late".  We cut to the Funlands, where after some verbal back and forth with King Kid (including a reference the movie plot point of Billy being separated from his parents by getting lost is now canon), Captain Shazam un-gags Mary who turns into Sexy Shazam.  Then it's cut to the Gamelands, where Latino Shazam and Asian Shazam, after a quick recap of Eugene's "origin", try to arrange a game with the Gamemaster so they can escape.  Then it's to the Wildlands where Freddy and Darla are on trial by the talking animals.  They are sentenced to death by tiger.  Then it's back to the Gamelands with a quick recap of Pedro's "origin".  Pedro gets ready to challenge the Gamemaster.  Freddy and Darla are thrown to the tigers (with a quick background on Mr Tawny tossed in). Black Adam approaches the Magiclands, to save (or destroy, depending on your point of view) the kids, but hits a roadblock-- Dr Sivana, who orders Adam to join the Monster Society of Evil... or die.  Next issue, the fight no one (except for maybe Mark Strong) has been waiting for - Sivana vs Black Adam.

The issue, written by Geoff "the Snake" Johns is par for the course.  Despite the illusion that a lot is happening, nothing really does, it's just all setting up the next issue, where again, nothing will happen just setting up the following issue.  A far, far cry from the brilliant Otto Binder, who could write a complete and great story with a beginning, middle, and end in about 10 pages. The art is by, well, four different artists, none of whom is Mayo "Sen" Naito.  It's all rather good but generic, and again I say Sen should be the artist on this series.  And really, the Snake needs to be replaced as writer.  This issues earns a D.
Posted by Shazamaholic at 9:59 AM