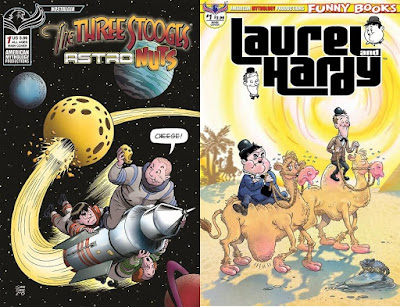 The Three Stooges Astronuts features a new lead story that is similar to the boys' later space themed shorts and features, but on a much larger scale that a comic book can illustrate opposed to the low budget of two-reelers or b-movies.  The script by S.A. Check faithfully captures the mayhem of the latter day Stooge space exploits, and the artwork by Brendan and Brian Fraim is, as usual, excellent, with gray tones by Dan Conner (hey, wait... the Roseanne guy?) giving it a vintage look. My one critique would be, since this is a space themed installment, it might have been better to have Joe Besser or Joe DeRita as the third Stooge instead of Curly Howard.  The second story is a reprint, and like the previous issue, it suffers from a crude xerox black & white look.  It would be better if the reprints that were originally in color were reprinted in color.  This issue earns a B.

Laurel & Hardy #1 (it has yet to be seen if this series will have normal numbering or will follow in the Stooges' footsteps by having all #1 one-shots) presents three stories, all in color.  The first one written by S.A Check, is well done, and I might hazard to say his style may be a better fit for Stan and Ollie than the Stooges.  The second story is written by Jordan Gershowitz, and captures the feel and tone of the classic Hal Roach two-reelers.  Both stories are drawn by Jorge Pacheco, who perfectly interprets the classic Larry Harmon character designs with a slightly more modern look.  The third story is a classic Larry Harmon-era reprint and holds its own opposite the new material.  This issue earns a B+.
Posted by Shazamaholic at 8:01 AM