After an almost comedic amount of delays, Shazam #7 is finally released.  Was it worth the wait? Well... maybe, depending on how you look at the ending.

But first,  the story picks up where the last issue left off, if you can remember that far back. Wizard Shazam brings Pedro and Eugene to the Wozenderlands, a bizarre mash up of Wonderland and Oz (I'm starting to think Geoff Johns might be doing some LSD while writing this. It would also explain the numerous delays).  Then it's to the Earthlands where we see the result of Mary exposing her secret to the Vasquezes, and she convinces Billy to spill the secret also.  Mr. Vasquez seems a little too giddy about it.  Perhaps foreshadowing a heel turn for him down the line?  Then it's cut to the Wildlands and Freddy and Darla, who were missing from the last issue, as they are about to be fed to Mr Tawny.  They say "Shazam" but do not change.  They are about to be eaten, but at the last second Tawny protects them from the other tigers, and the three of them escape.  In an attempt to get back home, the end up in the Darklands. 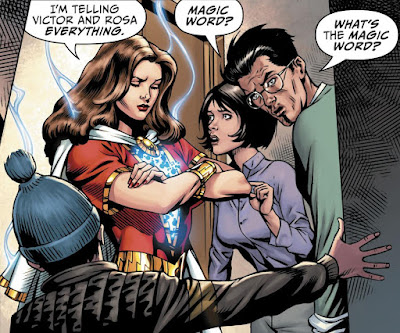 Then it's back to the Vasquez house where Captain Shazam and Sexy Shazam instruct the Vasquezes to keep their secret.  Sexy Shazam goes to get Wonder Woman to bail them out, while Captain Shazam flies to the Rock of Eternity.  Sivana has won his fight with Black Adam, and Captain Shazam is transported to the Darklands where he sees tombstones of all the characters. The Wizard appears and reveals to Billy there is an imposter - the one with Eugene and Pedro. He gives him instructions, only to fade away, revealing a tombstone for (spoiler alert)....


Captain Marvel.  So next issue New52 Shazam meets Captain Marvel.  Now, knowing Johns' track record, I am not going to get excited about this.  This will not be the classic pre-New52 Captain Marvel returning.  If anything, this will be a way to illustrate "Captain Marvel" is gone forever and all that is left is New52 Shazam.  Johns' script is typical Johns, and the art by Dale Eaglesham and Scott Kolins is rather generic.  This issue gets a C-.  Be back in four or five months for the next issue.
Posted by Shazamaholic at 2:23 PM