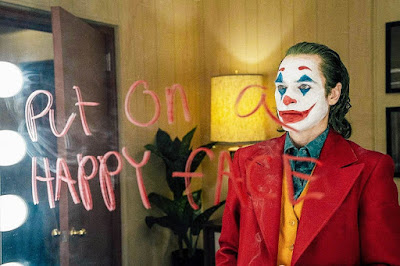 You have to go into this movie with the mindset that while it is based on the comic book character of the Joker, it is separate and not connected to the classic version. You had to be in the same mindset with Shazam!, but perhaps because Joker is such a much better made and better looking film, it is so much easier to get lost in this new take without constantly finding contradictions with the classic version, one of the many things Shazam! failed miserably at.

Within the first minute, Jared Leto's bungled take from Suicide Squad is completely blown away.  What we have here is a character study of a mentally ill person, Arthur Fleck (played by Joaquin Phoenix) that, at times, gets uncomfortable to watch. The concept of giving Arthur Pseudobulbar affect (PBA) is brilliant in its obviousness and makes one think why no story has ever hinted at The Joker having this ailment before.  Arthur is on screen for nearly the entire movie, and we are immersed in his daily life.  Outside of a straight narrative, we also get glimpses of Arthur's daydreams and fantasies.  Just when you think a concept is part of the story, it gets revealed it was only in Arthur's imagination.  Zazie Beetz plays Sophie, a woman Arthur becomes fixated on. Robert DeNiro  plays Murray Franklin, essentially a variation to David Endochrine from Frank Miller's Dark Knight Returns graphic novel, and surely, the main thrust of this movie is a live action variation of the scene from the graphic novel.  Arthur's aspiration to be a stand-up comedian comes from The Killing Joke. Brett Cullen plays Thomas Wayne as a physician-turned-politician much like in the unused Tom Mankeiwicz Batman screenplay.  Another borrowed idea comes from the recent Gotham TV series, where its proto-Joker Jeremiah Valeska inspired a movement, much like Arthur does in this movie, although with a more Antifa-like result.  One of the more cringe worthy moments is when Arthur begins to believe Thomas Wayne is his father, which I'm sure causes eye rolls from all comic book fans thinking "oh, that's original... make the hero and his enemy brothers". What makes it even more weird is that Arthur and Thomas look to be roughly the same age, even though in real life the two actors are nearly 20 years apart.  There actually isn't too much violence in this movie, but what there is, is very graphic. We also don't see Phoenix in full-on Joker mode until the last act of the movie, and don't expect to see any kind of Joker crime sprees.  But do expect to see that chilling, iconic moment on Crime Alley.

The direction by Todd Phillips and the cinematography are top notch, and as I said at the beginning, very artistic, and visually Joker completely blows away a film like Shazam!  As I also mentioned, at times this movie does become uncomfortable to watch, but wouldn't it be a disservice if a movie based on the Joker was all lighthearted fun?

Posted by Shazamaholic at 5:10 PM