It's unprecedented!  It's apocalyptic! It's putrid!  The latest issue has been released a month after the previous issue! But after reading it, I kind of wish there was a longer gap between these issues.  This issue picks up with the newly created Daddy Shazam (although he's wearing Zazzo-Plus's costume) encountering his son, who he doesn't recognize as his son, Captain Shazam.  There's a long monologue recapping every thing that has gone on... like we really need to read about it all again.  Nice way of filling a perpetually delayed issue, Johns.  Captain Shazam, Daddy Shazam and Sexy Shazam team up to attack Black Adam, but he removes the power from Mary.  Daddy Shazam attempts to fly Mary to safety but she inadvertently takes his power.  The game of Hot Potato, Geoff Johns style. 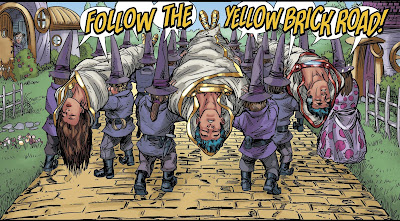 The three retreat to the Wozenderlands (a name that gets more stupid every time I have to type it).  They are found by the Scarecrow.  No not that one, the one from the Wizard of Oz.  With the Munchkins, no less. They carry them off to see Dorothy. This is quickly turning into either bad fan-fic or a really bad acid trip. Mary's and the dad's powers keep going on and off.  Then Wizard Shazam (who was foreshadowed as being an imposter a few issues back) pops in with the other kids. Wizard tells Captain the reason the powers are going on the blink is that he must choose between his father and his foster family.  The dad and the kids all give their closing arguments.  And then Billy chooses (spoiler alert)......
.
.
.
.
.
.
.
.
.
.
all of them.  Cut to the Rock of Eternity where Sivana and Mr Mind, observing all that has happened, plot their next move.   The artwork, by three different artists, unclear who did what, is in spots a notch above last issue's, but still generic.  Geoff Johns' script... he needs to lay off the LSD.  This issue earns a D.
Posted by Shazamaholic at 9:48 AM