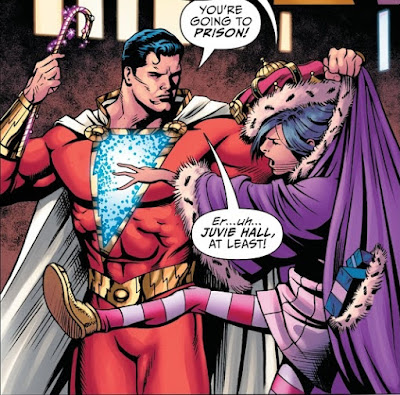 Holy Moly.  Another issue released one month after the previous.  Is this a trend?  Issue 10 opens with King Kid.  Remember him?  He was very important in the early chapters then just sort of vanished.  He's back.  Kind of wish he would vanish again. He's terrorizing Philadelphia until the Shazam Family shows up.  At one point while they are saving people, Daddy Shazam refers to Captain Shazam as "Captain".  Oh, Geoff... you throw us fans such bones.  Cut to Mr Tawny, watching all this on TV... live news coverage.  Apparently, he's now the Vasquez's Alfred.  Back to the action where Captain Shazam halts everything by simply taking away King Kid's wishing stick, reverting all the invaders into toys, its original form.  Captain Shazam wants to cart the King off to Juvey, but Daddy Shazam tries to nurture King Kid instead.

Cut to Sivana and Mr Mind at the Rock of Eternity where they succeed in opening the door to the Monsterlands.  They enter to recruit what I'm guessing is going to be the New52 Monster Society of Evil.  Cut to the Vasquez home for a nice sit-com family dinner scene.  Billy takes a plate to (the potentially imposter) Wizard Shazam who is creepily lurking in Billy's bedroom.  Billy asks what he did with King Kid.  The Wizard replies he sent him back to the Funlands and freed all the adults who will decide what to do.  Cut back to Sivana and Mr Mind in the Monsterlands where Mr Mind lectures Sivana on the origins of the Monsterlands, the Rock of Eternity, and the Council of Wizards.  Kept prisoner there is Superboy-Prime who vows revenge against Billy Batson.  Cut back to Billy who suspects something is not quite right about the Wizard, who later that night neutralizes Daddy Shazam. Geoff Johns' script is slightly better than the previous issue, and the art by Scott Kolins and Dale Eaglesham is more consistent than the previous issue.  This issue earns a C.
Posted by Shazamaholic at 10:09 AM