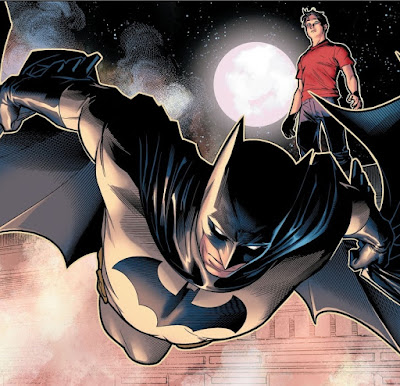 Issue 12 turns out to be a fill-in issue set in between the events of Curse of Shazam and the current story arc. You know there is a problem when, even with multiple issue postponements, and a pandemic that halts publication for two months, there still needs to be a fill in issue by a different creative team. Jeff Loveness is brought in to bail out Geoff Johns, and he writes a script that is wholly influenced by the David Sandberg movie. The characters, the tone, the dialogue, and the presentation of the story are all beat for beat based on the movie rather than Johns' work.  Plus they bring in Batman as a guest star just to insure the sales improve.

The issue opens with Billy and "Freddie" (that's how they misspell it) encountering Herkimer. Billy changes to Captain Shazam and quickly defeats him. During this whole sequence, Billy/Capt Shazam and Freddy bicker about Billy having "lame villains" as the dialogue is in full Asher Angel-Zack Levi-Jack Dylan Grazer mode. Concerned that Billy needs to up his game as a superhero, he goes to Gotham City in a meta-moment looking for a team up. He encounters the Scarecrow, and there is a lot of CW-like exposition dialogue.  Scarecrow zaps Capt Shazam with the fear gas, but it's Batman to the rescue. He attempts to talk Capt Shazam down from his inner fright, but Scarecrow injects Batman with fear serum. We go inside Billy's mind as there is a merging of memories as he witnesses young Bruce Wayne's life-changing moment. At that point both he and Batman are able to take down Scarecrow.  Batman and Billy then have a roof top heart to heart talk, and we have another meta-moment about team ups as the issue ends.

The artwork for this issue is supplied by Brandon Peterson, and it is a step above the usual artwork seen in this series.  I know there are a few fans out there who hate the new52 Shazam, but enjoyed and liked the movie. This issue is for that demographic. It earns a B.

Posted by Shazamaholic at 3:48 PM