With Lent here, I thought this would be a good time to review the Ronald Knox version of the Bible. A few months ago, I was lucky enough to win a used copy from the Catholic Bibles blog. Obviously, I haven't read the entire Bible, but I think I've read enough to give a review. 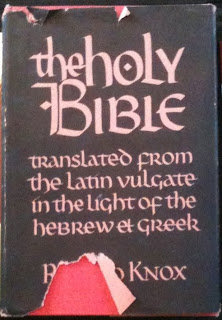 First, a little history. Initially, the main Catholic English translation of the Bible was the Douay-Rheims, which I wrote about in a previous post. In the late 1930s-early 1940s, revisions began on the Douay-Rheims, but this time, America and Britain would work on their own translations. In America, there was the Confraternity New Testament, which I also discussed in that same post. In Britain, Monsignor Ronald Knox took it upon himself to revise the entire Bible, and the result is what is today referred to as the Knox Bible.

There are those who say the Jerusalem Bible is the most poetic and lyrical modern translation of the Bible. In my opinion, the JB reads more like a novel, and the title of most poetic and lyrical modern translation should go to the Knox Bible. With its British flavor, it does have a very melodic cadence. As with the Confraternity New Testament and the Revised Standard Version: Catholic Edition, the Knox Bible has mild archaic language, making the passages sound more prayerful without getting so archaic as to think one is reading Shakespeare. Regarding the Psalms, Fr Knox has done something I think is clever. In the original Hebrew texts, certain Psalms are written so each verse begins with a letter of the Hebrew alphabet, going in order. Knox translated these Psalms in such a way to do the same thing with the English alphabet.

There are certain passages that a Catholic always looks to first to see if that Bible has the traditional translation. The Knox Bible scored high in that regard.

Genesis 3:15-16 "And I will establish a feud between thee and the woman, between thy offspring and hers; she is to crush thy head while thou dost lie in ambush at her heels."

Matthew 16:18 "... thou art Peter, and it is upon this rock that I will build my church; and the gates of hell shall not prevail against it."

Matthew 16:26 "How is a man better for it, if he gains the whole world at the cost of losing his own soul? For a man's soul, what price can be high enough?"

Luke 1:28 "Into her presence the angel came, and said, Hail thou who art full of grace; the Lord is with thee; blessed art thou among women."

Unfortunately, the Knox Bible also misses some. In the Gospels, "amen I say to you" is not used. The classic phrase "In the beginning" is changed to "At the beginning of time" in both Genesis and John. The much loved Psalm 23 is a little clunky (the King James version of Psalm 23 seems to be the definitive standard). Luke 1:34 has Mary asking "How can this be" (implying she doubts the Angel Gabriel) instead of "shall" or "will". Isiah 7:14 has "maid" instead of "virgin".

But overall, I enjoy this version, and would not hesitate to recommend it.
Posted by Shazamaholic at 3:35 PM

One of my favorite translations, one which I can't obtain a copy from anywhere yet.

I do hope Baronius Press release it in 2011.

It is very difficult to read the Psalm any other way, since we're so used to it. However, I'll at least consider other translations, as long as they stay faithful to the text.
I also wanted to point out that "maid" is synonymous with "virgin" in classical English. Shakespeare uses it in this way frequently.