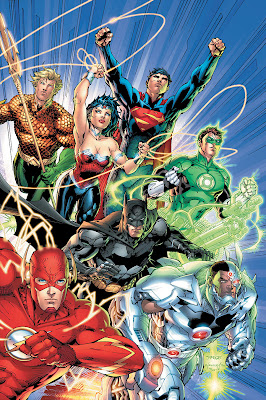 This week the company wide reboot of DC Comics began.  In a nutshell, the entire continuity has started over, with the exceptions of Batman and Green Lantern, who now seem to be the "golden age" heroes, having been around several years longer in the timeline than Superman and the other characters.  The real Golden Age heroes, the Justice Society of America, have been retconned out and put on an alternate earth, Earth-2.  Also missing from Reboot Earth are the Marvel Family.

In my humble opinion, the DC reboot screwed up by not starting Batman over with the rest of the universe. The Batman franchise is overpopulated with replacement Robins, excessive "Batman Family" sidekicks, and even a "Batman Inc", where there are versions of Batman in other countries.

I really want to see the franchise go back to simplicity, and have the original and classic Bruce Wayne and Dick Grayson version of Batman and Robin.  Get rid of all the excessive baggage.  Of course, we don't get that.

Then there's the Marvel Family. Rumor has it, as the JSA has been moved to Earth-2, the Marvels may be moved to Earth-5.  Grant Morrison insists his "Thunderworld" one-shot will be part of the second wave. I would be fine with that, if DC would actually give us an ongoing Shazam! series, with stories and art based on the Otto Binder-C.C. Beck era.  But with anything regarding Captain Marvel, DC usually gives us some kind of bait-and-switch.  It is entirely possible an entirely new character based on the same premise may be introduced on Reboot Earth, named Captain Thunder, whose secret identity is not Billy Batson, but a college age person who can claim superpowers by uttering "Shazam".

I recently wrote an open letter to DC regarding Captain Marvel and I still stand by everything I wrote.

Perhaps Earth-5 would be a good place in reintroduce the "real" Batman and Robin I've been longing to read... a mash up of the original 1939-1941 stories with the great "new old look" era of 1968 (moody and nocturnal adventures written by Frank Robbins and drawn by Irv Novick, Bob Brown, and Joe Giella), and the defining Steve Englehart-Marshall Rogers stint and elements of the Gerry Conway-Gene Colan-Don Newton serialized era.

Or maybe the DCnU Reboot Earth will ultimately be a total failure and a year from now, we'll have yet another reboot.  Only this time, DC may do it right, by using Alex Ross' Justice as the foundation.
Posted by Shazamaholic at 12:06 PM