The first story in issue #12 features one of the dumbest villains of the TV series, Marsha Queen of Diamonds.  The first episode this character appeared in was neck and neck with the Archer episode as second worst episode of season two (the Black Widow episode being the worst), with one of the dumbest cliffhangers - Batman being forced to marry her.  Unbelievably, this character was not negated to a one shot villain, and was brought back in a second episode... a three-parter, no less, but was basically reduced to being The Penguin's moll.  With this issue, writer Jeff Parker has officially "jumped the shark".  While his work on this series has been mixed, this story cements his legacy as a Charles Hoffman-Stanford Sherman disciple. The plot deals with Marsha tunneling into the Batcave, stealing the Bat-diamond, and the Dynamic Duo recovering it. Batman does some good observational detective work early in the story, but otherwise its a big disappointment, from D-list villain Marsha successfully breaking into the Batcave and stealing the Bat-diamond, to Alfred using a Bat-pole to go up into Wayne Manor instead of using the service elevator, to Marsha's Aunt Hilda's dopey magic and potions.  Dario Brizuela contributes perhaps the worst artwork this book has seen.  He really goes overboard drawing Batman as a pot bellied, out of shape slob. 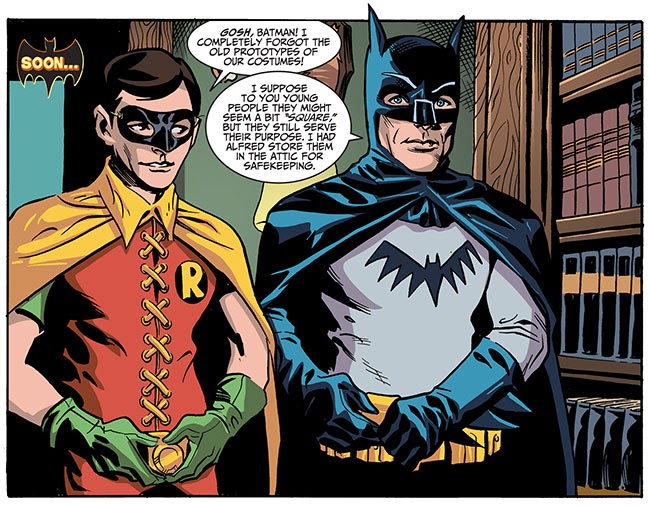 The second story is a breath of fresh air. Written by the team of Art Baltazar and Franco Aureliani, who also wrote the prematurely canceled Johnny DC  Billy Batson & The Magic of Shazam title, they use the second season one-shot villain The Minstrel.  He breaks into Wayne Manor and steals the Shakespeare Bust as bait to lure the Dynamic Duo to him so he can use a sonic vibration emitter tuned to the exact frequency of the Batmobile to destroy them.  Unbeknownst to Minstrel, the bust is the key to the bookcase Bat-pole access, and he has unwittingly locked Batman and Robin out of the Batcave. While this could have been another disaster like the lead story, Art and Franco have two things on their side.  First, they make the villain a minor player in the story, focusing more on Batman and Robin (and like the lead story, early in they show Bruce using his detective skills).  Second, since they are locked out of the Batcave, Art and Franco have Bruce and Dick wear "prototype costumes".  Batman's is the one used in the screen tests for the TV show, while Robin's looks like the costumes worn in the two serials from the 1940s.  Such a nod to the characters' histories like that really elevates the story and makes it clever and special.  Ultimately they also use a prototype Batmobile (looking like a cross between a 1959 Eldorado and the classic 1940s-50s Batmobile of the comics... with Alfred driving no less, another nod to the serials) rendering Minstrel's machine useless.  The art by Ted Naifeh is better than Brizuela's, but a better artist, like Jonathan Case, Ty Templeton, Joelle Jones, Chris Sprouse, Christopher Jones, or Joe Quinones (all of whom drew previous stories) would have really made this story into a masterpiece.  I hope to see Art and Franco script more stories.  They would also be the perfect writers to bring the TV version of Captain Marvel into the 66 continuity, using the Legends of The Super Heroes TV specials as a common denominator linking the two series  (hint, hint DC).  The first story earns a D while the second story earns a B, averaging this issue's grade to a C.
Posted by Shazamaholic at 4:07 PM