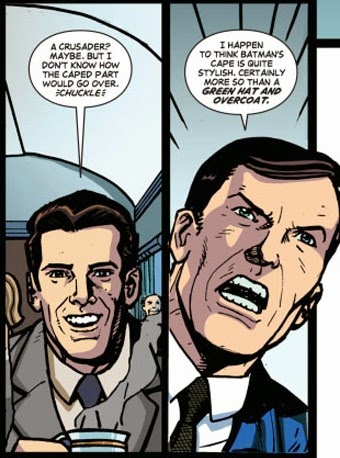 The first issue of this mini series crossover event between DC and Dynamite sets the pace by following the format of the Batman TV series in a way that the regular Batman '66 title has avoided. Written by celebrities Ralph Garman and Kevin Smith (yes, that Kevin Smith), this issue unfolds like a typical TV episode, which gives this book a sort of "yes... finally!" moment that we never got from the regular monthly book.  But to be fair, I do think its wise for the regular series to stray away from the TV show's format, because the TV show itself quickly fell into a rut, a sense of a sameness to every episode.  Plus, when a story does use the show's format, it makes it a bigger event. The story starts with Dick preparing for a date with Mayor Linseed's niece (a continuity gaffe - not on Garman and Smith's part, but Jeff Parker's, as Batman '66 #11 features a different mayor, one who looks similar to the mayor from Batman Forever as played by George Wallace). A Bat-call summons Batman to protect a valuable fossil collection arriving in Gotham by train.  On the train, Bruce meets his childhood friend, Britt Ried and Kato. There are a couple out of character moments: one where Kato suggests the Green Hornet's masked accomplice should have his own code name (out of place for that Bruce Lee version of Kato, much more in line with the recent - and awful - Seth Rogan movie), and one where Bruce loses his temper over Britt's belittling of Batman (again, seems very out of place for the Adam West version of the character).  Suddenly, the train is stopped by a gummy, glue like substance covering the tracks.  Bruce, Britt and Kato investigate, as Bruce is able to contact Dick via cuff link radio, to end his date with Linseed's niece to meet him at the train.  A clever bit where Garman and Smith use Dick's alias "Dog George" from the episode The Joker Goes To School/He Meets His Match The Grisly Ghoul and also give Bruce a similar codename, "Bravo Whiskey".  Bruce checks the cargo, only to find Col Gumm, who is now permanently covered in glue from a lab accident, and goes by the name General Gumm, with his men attempting to steal the fossil collection.  He's thwarted by the arrival of the Green Hornet.  Meanwhile Robin flies up in the Batcopter, and in a clever moment reminiscent of the feature film, is able to give Bruce his Batman costume.  Eventually the four heroes get Gumm trapped atop the speeding train, but he uses his glue gun to stick the heroes to the train. Gumm and his men make off with the collection, as he uses a solvent on the tracks to get the train going again.  And to make matters worse, the train is speeding toward a low tunnel, sure to decapitate our heroes. 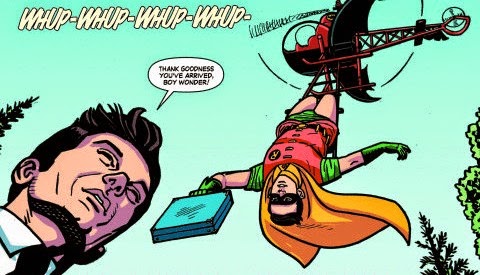 Garman and Smith seem to have upped the quality a notch from Jeff Parker on the regular series. I appreciate what Garman and Smith did with the first half, expanding on the back story of Bruce and Britt as old friends.  Things pick up in the second half, but I wonder if 6 issues may be too long for a single story. It may have been wise to make it 3 or 4 issues.  We'll see how the remaining issues play out, and what Garman and Smith have planned. Ty Templeton's artwork is superb, and I wish he would get to draw more issues of the regular series.  This issue earns an A-.
Posted by Shazamaholic at 11:05 AM