The first image of director Genndy Tartakovsky's CGI Popeye movie has been released.  Allegedly this is a concept painting by Richard Daskas, and although Sony has begun using it to promote the project, it officially does not have a production green light yet, as Tartakovsky is still only making animation tests. 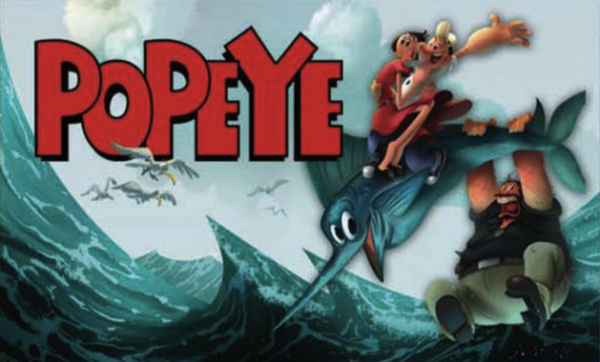 Regarding the movie, Tartakovsky has been quoted as saying,
"For me, it’s the original early ’36 to ’40 range of the Fleischer Popeye cartoons. I think since they were based out of New York, it was very different. I don’t want to say underground, but it was more racy, more edgy. And I think while everyone was warming up to Disney, Fleischer made huge marks in animation, with Popeye, Betty Boop and Superman. They were doing amazing stuff and for me it’s the exaggeration and the silliness, the laughter, the movement, the physical comedy. And that’s one thing I’m after for Popeye. It’s the whole reason I agreed to do the feature; I said 'If I’m going to do this, I want it ten times more physical and crazy than we did in Hotel Transylvania and ten times more character.' And [Sony] were like, 'Alright.' The funny thing is that CGI was designed to mimic reality, but I’m going to use this realistic tool in a completely different way."

Looking at the image, the figures appear to be much more fluid than the CGI Popeye's Voyage: The Quest For Pappy DVD from a few years ago.  Olive appears to be from her Famous Studios era.  Popeye looks to be in a white shirt and blue pants... perhaps a nod to the Robin Williams movie?  I can't seem to see his pipe.  I hope it's not eliminated for political correctness.  I think its very good that Tartakovsky is inspired by the Fleischer cartoons, and although it will be CGI, it will mimic traditional hand drawn cel animation in a way we have never seen yet with CGI.

Rumors have already begun circulating as to who will voice Popeye. Jim Carrey and Adam Sandler have been mentioned.  Sandler would be a total disaster, and I hope he is not cast as Popeye.  Carrey might be a good choice, as he was able to nail the beloved Jack Mercer voice many years ago on an In Loving Color sketch, although who knows if he can still deliver. If the studio feels they must get an established star, they might as well consider Robin Williams. Although not a star the caliber of Williams, Carrey, and Sandler, I would like to see Dave Coulier be considered for Popeye.  Back on Full House, he showed a great love for the character, and has perhaps come the closest to duplicating the Jack Mercer voice.  Maurice LaMarche, who voiced Popeye after Mercer's death in the short lived and awful Popeye and Son cartoon series, couldn't come as close as Coulier or Carrey to getting Popeye's voice right.  Billy West, who did the voice for the Popeye's Voyage DVD, sounded like LaMarche, but higher pitched, giving Popeye a chipmunk-like quality to his voice.
Posted by Shazamaholic at 10:56 PM