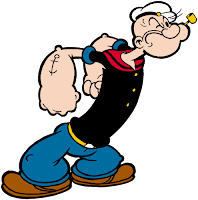 It has been reported  Genndy Tartakovsky is off the developing Popeye CGI film. In all likelihood, the entire project, if not dead, is stalled indefinitely. The test footage that was released a few months ago looked promising, but overall I thought it was too much Tex Avery and not enough Max Fleischer.
Add to that the concept of an "origin movie" where Popeye and Olive were to be portrayed as teenagers (hence the lack of a pipe and tattoos for Popeye) left me feeling this was not the right direction to go.  I would like to see an animated Popeye movie, but with a more conventional premise and preferably with hand drawn animation with perhaps 3-dimensional sets in the style of the Fleischer two-reelers.
Posted by Shazamaholic at 3:29 PM