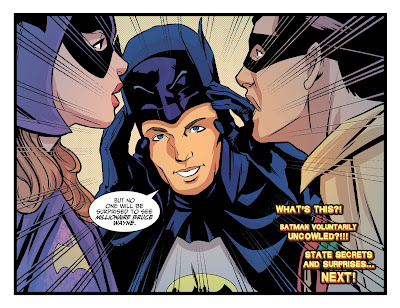 The third issue of this miniseries has some highs and lows. THRUSH continues to use Batman's B and C and a couple D list villains as agents, and the mysterious ringleader is revealed as Corvid.  But who exactly Corvid is has yet to be revealed.  The second half of this issue seems like filler. Via a video conference between the Batcave and UNCLE HQ, a brief history of UNCLE and THRUSH is given, and then a recap of a heist earlier in this very same issue. The heroes and the agents then meet face to face to plan their next move, and Batman unmasks! Writer Jeff Parker slips a little this issue.  Two-thirds of the book are drawn by David Hahn then Pasquale Qualano steps in for the final few pages.  The change in art style isn't quite seamless, but it's not very jarring either. This issue earns a C.
Posted by Shazamaholic at 1:27 PM