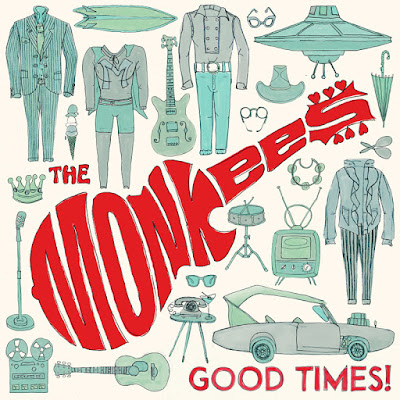 It has been announced The Monkees will release a new album in the Summer of 2016, titled Good Times! Like The Monkees’ first two albums, and their ill-fated 1987 album Pool It, the new album will feature tracks written specifically for the band by some of the music world’s popular songwriters, including Rivers Cuomo (Weezer), Ben Gibbard (Death Cab for Cutie), Andy Partridge (XTC), Noel Gallagher, and Zach Rogue (Rogue Wave). Unfortunately, as of now, nothing new from vintage Monkees song writer Bobby Hart. In addition, some incomplete songs from the 1960s will be augmented and remixed, including "Love to Love" featuring the late Davy Jones' vintage vocal, and the album's title tune "Good Times" from a Harry Nilsson demo. The album cover art and a partial track listing has been unveiled, a release date is set, but amazingly nothing has actually been recorded yet.  Micky Dolenz commented, "[Rhino executives] John Hughes and Mark Pinkus both said they wanted us to make a new album, and they spelled out the exact kind of album that would go down well with the 50th anniversary and with our fans...I realized that the whole indie rock scene is all about recapturing that 1960s jangly guitar sound of the Monkees... One reason we don't have a final track listing yet is because once we put the word out all these people said they wanted to get involved... My job is just to come in and sing lead vocals. It's no different than the old days when we had to get everything done in three-hour sessions... Frankly, we don't even have a recording schedule right now!"
Even more amazing is that the album, despite not being recorded yet, is already racing up Amazon's best seller's chart!

I am having mixed reactions to this news. While I love the idea of a new Monkees album to celebrate the 50th Anniversary, this album sounds like it could easily end up being Pool It II. On the other hand, if more care is taken with the song selection and backing tracks, it might be as great as the 1986 tracks "That Was Then This Is Now" and "Anytime Anyplace Anywhere".  I remember when their 1996 album  Justus was released. I thought it was great, a far superior effort than Pool It.  I was actually shocked when I was lurking Monkees threads on the Hoffman Forums to learn many Monkees fans hated Justus as much or even more than Pool It. For better or worse, Good Times! at this point will not have that pure Monkees-as-a-group vibe that Headquarters and Justus had.  I just hope the songwriters and musicians contributing to this album have a better sense of The Monkees than the crew who worked on Pool It did. One other thing that kind of puzzles me is the inclusion of remixed and augmented tracks from the 1960s. I'm sure "Love to Love" is included because it was written by Neil Diamond, and it is a way to include a vocal from Davy.  Or perhaps they will get Jimmy Fallon to do the vocal.  But that song in question has been released several times since the 1980s, and frankly isn't one of the better Missing Links from the vaults. I would much rather see them finish incomplete tracks like "She's So Far Out She's In", or have definitive Monkees versions of "Different Drum" and "Good Looker".  Or for Davys' vocal, an augmented and remixed "My Share Of The Sidewalk", that maybe mixes the second, breezier backing track from the Instant Replay deluxe box set into it.  And that brings up another concern.  How much involvement will Mike Nesmith have? As of now, he is only slated to contribute one song, a newer composition titled "I Know What I Know".  But in true Nez cryptic style, when this news broke, he posted the video to his song "Rio" on his Facebook page, which has the appropriate lyric, "It's only a whimsical notion to fly down to Rio tonight, and I probably won't fly down to Rio, but then again, I just might."

I remember when The Monkees had their big resurgence in the mid to late 1980s. I truly believed that they should have covered "The Curly Shuffle".  I had a gut feeling, had they done so, it would have been a top 10 hit for them. There has been an unspoken link between the Monkees and the Three Stooges where that both properties were produced by Columbia Pictures and were filmed on many of the same sound stages. There are even several props used in the Three Stooges' two-reelers that were also used on the Monkees' TV series, most notably the bunny pajamas the Stooges and Peter Tork wore. On a more subjective side, The Stooges two-reelers and The Monkees TV series are similar in that I could and do watch them over and over and never get tired of it.  I still believe The Monkees should cover "The Curly Shuffle" on Good Times! albeit not so much as an intended hit single like it could have been in the 1980s, but more along the lines of the album's novelty track, a la "Gonna Buy Me A Dog" and "Your Auntie Griselda".  But what do I know?  I'm just a fan.
Posted by Shazamaholic at 6:40 PM