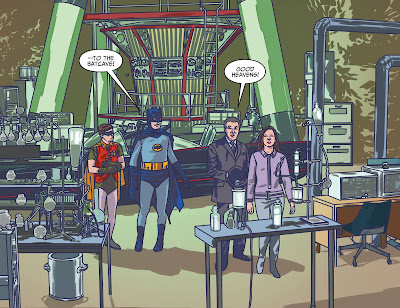 This issue picks up right where issue 1 left off. The Cybernaughts are trying to abduct Catwoman from the Gotham City Jail. We see there is a mystery woman controlling them. Batman and Steed are successful in thwarting the abduction of Catwoman. Using a can of Bat-Rust (and a call back to a line from Batman Forever) the heroes capture one of the Cybernaughts. Lord Marmaduke Ffogg is revealed to be working with the mystery woman, and uses his Ffogg pipe to help the other Cybernaughts escape. Back at Gordon's office, they interrogate Catwoman, and the heroes get a report that Michaela Gough, who appeared at the beginning of the first issue, was kidnapped.  Could she be the mystery woman calling the shots?  Steed and Peel explain to Batman and Robin the origin of the Cybernaughts. There is a lot of dialogue in this issue. In a way, it captures the spirit of 1960s adventure shows, which tended to be more talk than action due to budget restraints. The heroes head to the Batcave, after putting Steed and Peel under the effect of Bat-Gas, to study the captured Cybernaught, but several more Cybernaughts have trailed them to the Batcave.  How could Batman not know that a homing device was incorporated in the Cybernaught... or does he know?  Writer Ian Edginton's script is dialogue heavy, but captures the tone of both shows perfectly. Once again, the highlight is Matthew Dow Smith's art. If only the regular run of Batman '66 had such amazing art instead of the weak lampoonish art that it suffered with for too many issues. Issue 2 earns another A-.
Posted by Shazamaholic at 12:19 PM