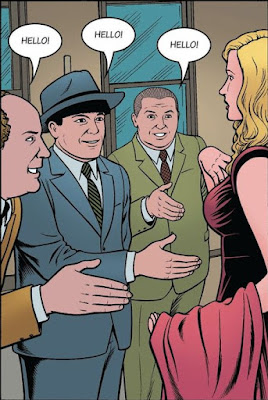 This one flew under the radar.  I had no idea a new Three Stooges comic book series, published by American Mythology, was coming out until I saw it at the store.  So, of course I had to pick it up.  But what's more confusing is, after I got it I did some online research, and it appears this will be a series of one-shots, all labeled as #1.  So, I think I did see the second issue at the store, and according to the website it should be out now, but I didn't pick it up because it was labeled as issue #1 and I thought it was just another variant cover.  So I will have to pick that one up next time - the second issue #1, which is really issue #2, but since this is a series on one-shots, all issues will be issue #1.  Huh?  I think I got it.  Maybe. I think this may actually be a test run for DC's next reboot.  Make every issue a #1.

So anyway, on to this issue, the first issue #1 (not to be confused with the second issue #1, which is really issue #2, which may also be out as I write this). Oh, look!  On the inside front cover, it lists this issue as "The Three Stooges: The Boys are Back" #1. It contains three stories.  The first is "Triple Knuckleheader" written by S.A. Check and art by Bill Galavan. The art is very good, very reminiscent of Norman Maurer's artwork on the original Three Stooges comics of the 1940s and 50s.  The story, however, seems to be heavily influenced by the mediocre Farrelly Brothers movie.  It puts the boys in a modern setting with modern references to T-shirt cannons and Johnny Depp pirate movies. It's basically a comic strip's worth of material padded out to 8 pages.  Then there is a fake add for "Stooge-Monkeys".  They misspelled Monkees. The second story, "The Big Nyuk, Nyuk, Nyuk" fares much better. Written by J.C. Vaughn with art by Brendon and Brian Fraim, this story is inspired by the original two-reelers.  A film noir detective story where a beautiful dame hires the boys to get some photos back from a gangster. The art is very good, capturing the Stooges' likenesses and establishing the right tone for the story.  Next is a "Stooges Fun Fact" article that is little more than a cut and paste from Wikipedia. The final story is a reprint from "Dell Four Color" #1170, from 1961 (misidentified as 1942, although that's the year the "Dell Four Color" series started). "Midway Madness" written by Jerry Belson with art by Sparky Moore, features Joe DeRita as the third Stooge. The art is pretty bad and crude, but the story is decent, perhaps better than the lead off story in this issue. But what I find amazing is there is more plot in this 8 page story from 1961 than there is in the other two stories combined... dare I say more plot than a typical issue of a current DC comic. Overall, this issue earns a B and is a must have never-the-less.
Posted by Shazamaholic at 2:08 PM