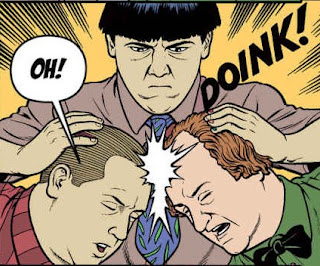 The Three Stooges #2, which is really The Three Stooges: Stooge-a-palooza #1 because this is a series of all number ones instead of a consecutively numbered series, is the second issue of this volume even though it is a number one and if you understand that, then point to the right.  Even my comic book store is thoroughly confused thinking these are all variant covers to a single issue, which is why I'm a month or so behind in getting these comics. The issue's first story is "Stooge in a Box" written by S.A. Check with art by Brendon and Brian Fraim. As with Check's story in the last issue, it seems to be in the mold of the Farrelly Brothers movie, setting the Stooges in contemporary times and situations.  The boys land jobs at a burger joint and create chaos. There are a few good gags, but overall I prefer the Stooges to be in a more timeless and unspecified era.  The art is very good, but unlike the Fraims' work in the last issue, which had a tone reminiscent of the two-reelers, their art in the context of the script has a contemporary tone. After a fake Fruit Pie ad, the next story, by the same team, is "Night of the Living Stooge". It has the boys having jobs as mall cops (and they happen to be living in the mall as well). A funny gag has Larry looking like Richard Simmons, but overall this too has a modern trendy feel, with the boys encountering zombies.  Then there is a two-page spread which seems to be a fake movie poster. Up next is a reprint from Dell Four Color #1170, "Boobs in the Woods" written by Jerry Belson with art by Sparky Moore, and featuring Joe DeRita as the third Stooge.  As with the reprint from last issue, the script is good, and has more plot than either of the two new stories, but has weaker artwork.  It seems to be loosely based on the two-reeler "Idiots Deluxe", where the boys go camping and encounter bears, rangers, and geysers. The issue closes with a text article on the annual Stooges convention in Philadelphia. This issue earns a B-, a slight step down from last issue.
Posted by Shazamaholic at 11:25 AM