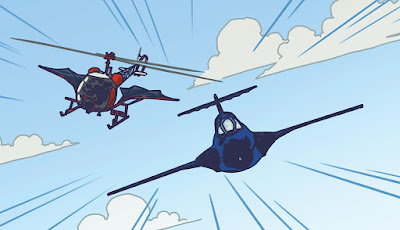 This issue opens with Batman and Mrs Peel via Batplane, and Robin and Steed via Batcopter, in hot pursuit of Michaela Gough and Lord Ffogg via airship.  Peel deduces Batman is really Bruce Wayne, and Michaela sends her flying Cybernaughts into a dogfight with our heroes in a spectacular action sequence.  Robin reconfigures the tracking device to short circuit the Cybernaughts.  Michaela contacts Mr Freeze to help set a trap. Bruce and Dick, incognito via false mustaches and a toothpick, arrive in London to meet Steed and Peel with Inspector Gordon (Commissioner Gordon's cousin) at the Tower of London.  We are introduced to Michaela's unseen and mysterious father, as she and Freeze set a trap involving the White Star diamond. At the Tower of London, our heroes are ambushed by the Cybernaughts, posing as Beefeaters, with Michaela and Freeze electronically communicating with them through the Cybernaughts. Matthew Dow Smith once again turns in a stellar job on art, and Ian Edginton continues with a quality script, the highlight being the airborne dogfight, although the plot really isn't advanced in this issue. This issue earns a B.
Posted by Shazamaholic at 11:30 AM