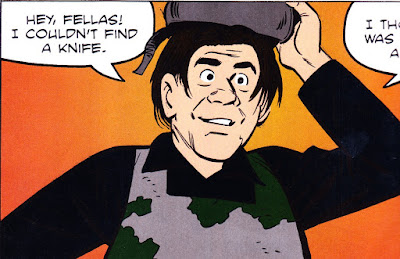 The Three Stooges #4, or The Three Stooges: Curse of Frankenstooge #1 (same comic, two titles, don't ask) opens with the PSA advising kids not to imitate the Stooges on the inside front cover (it was the final panel in the previous issue). The first story, "Scaredy Stooge", written by S.A. Check with art by Bill Galvan. The plot has the boys as videographers who have taken a gig at what appears to be a haunted house. From there we get parodies and references to contemporary horror franchises like Child's Play and Scream, but the highlight of the story is the shocking last page cameo by.... spoiler alert.... Shemp! The art in this story is a bit more cartoonish, somewhat reminiscent of The Three Robonic Stooges. Anyone remember that cartoon? Next up is the title story, written by Christopher Hill with art by the Fraim Brothers. The boys never did do a parody of Universal's Frankenstein movies, but this story shows us what it could have been like.  Moe is the mad scientist, Curly is his hunchback assistant, and Larry is the manservant of Moe's blonde betrothed (no kidding) who gets turned into the monster. This story has an epic look and feel to it.  Next up are some coloring pages (I'd like to see more of Mark Wheatley's art in this series, as he really nailed the Boys' likenesses), and a Halloween themed reprint from issue 24 of the Stooges' Gold Key series, with Joe DeRita as the third Stooge. As usual the reprint has a decent script but crude art.  The issue ends with a nice text piece on the Fraim Brothers.  This issue earns a B+.   One more note, also out this week is a free Comic Fest Halloween Hullabaloo issue.  It has one new story, "Trick or Eat" written by James Kuhoric with art by Adrian Ropp.  The Boys decide to dress up and go Trick or Treating to get free candy.  It's a brief 4 page story, and the art is in a very modern animated style.
Posted by Shazamaholic at 2:24 PM