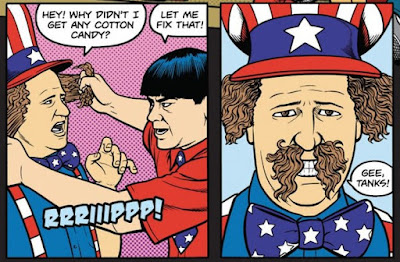 The Three Stooges #3, aka The Three Stooges: Red, White and Stooge #1, features two stories instead of three like the previous issues, but that is to its advantage.  The title story is longer, and better for it. Written by S.A. Check, this time he gets a solid balance between classic Stooges and a modern interpretation, where his previous scripts tread too much on the lackluster Farrelly Brothers movie. Due to the longer length, there is more of a plot than previous issues. Senator Ted Snedly (a nod to Stooges creator Ted Healy?) is running for president but needs a running mate.  He sees the Stooges at a parade saving a young girl.  He latches onto the boys in hopes his poll numbers will go up, but due to the boys, er, best efforts, including this series' first major pie fight, the polls go in the opposite direction.  Snedly drops out, and the Stooges fill in the political vacuum to emerge as a force not seen since Donald Trump.  Brendon and Brian Fraim's art is excellent as usual.  The second story, "Beach Boo-Boobs", is a reprint from issue 44 of the Stooges' Gold Key series, with Joe DeRita as the third Stooge. As with the reprints from the previous issues, it has a good story featuring the boys taking jobs as lifeguards, but crude artwork. The last panel is a PSA warning kids not to imitate the Stooges' slapstick. This issue earns an A.
Posted by Shazamaholic at 12:27 PM