After the dismal Nolan-wannabe film Thor The Dark World , Thor Ragnarok is like the rebirth of the Joel Schumacher style of superhero movies. Director Taika Waititi not only channels Schumacher, but also Tim Story (despite the amount of hate his Fantastic Four movies get, they were the blueprint or prototype for the MCU), and even a bit of William Dozier.  With Ragnarok, camp is back and it is back with a bang. Such high camp, that Cate Blanchett, who plays Hela, and Jeff Goldblum, who plays the Grandmaster, could have very well stepped right out of a third season episode of Dozier's Batman TV series or Schumacher's Batman & Robin. But despite all this... or maybe because of it, Ragnorok is actually a very entertaining movie.  You could say it is the "Anti-Snyder" super hero movie.

Way back when the first Thor movie was released, lamenting that the filmmakers jettisoned the Dr Donald Blake aspect, and Thor's helmet, I said Thor's two biggest gimmicks were his hammer and helmet. Well, now they also got rid of his hammer, and shaved his head for good measure. But before the hammer goes bye-bye, there is one cool transformation reminiscent of the classic Blake into Thor transformation.

A cornerstone of the MCU movies is that they really are no longer solo movies, but all team ups to some extent, and here we have the Hulk essentially the co-star of Ragnarok, a nod to Thor's very first live action incarnation, in the TV special The Incredible Hulk Returns. Intentional or not, Hemsworth even briefly wears a helmet that looks just like the one worn by Eric Alan Kramer.

Like all recent superhero movies, the script tells a non-linear story that jumps all over the place and sometimes loses the viewer, but the entertainment factor here negates any flaws in the script. Basically, the plot deals with Thor's older sister Hela attempting to take over Asgard, while Thor and Loki end up trapped on Sakaar and have to deal with the Grandmaster and the hedonistic society he has set up. We find out where the Hulk has been since Avengers Age of Ultron, and we are introduced to Valkyrie, played wonderfully by Tessa Thompson.  They ultimately team up to go against the Grandmaster, then go after Hela.  There are also cameos by Doctor Strange and Black Widow. With better CGI than Schumacher or Story ever had, Waititi keeps the pace up and makes this warehouse rave of a movie consistent and avoids sluggish moments. Chris Hemsworth really shines as a comedic and campy Thor. The more comedic the character is, the more natural and engaging he is in the role, compared to his phoned-in performance for overly grim and serious The Dark World.  The lightning aura that emits from Thor could pose a problem for David F. Sandberg if he wants to do a similar effect with Captain Marvel, as he could be accused of copying. 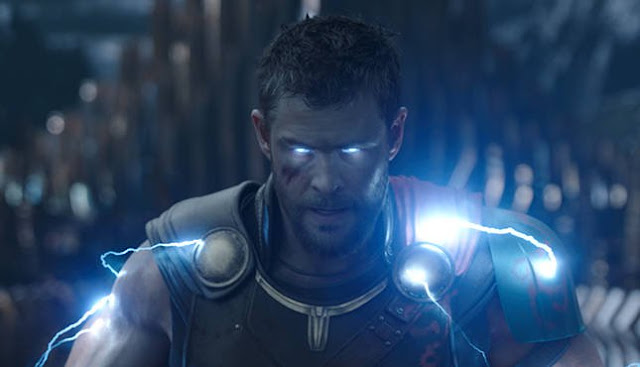 Tom Hiddleson continues to make Loki walk a tightrope between hero and villain (I expect Dwayne Johnson to take a similar if more brutal route with Black Adam), and Mark Ruffalo returns as the Hulk and Bruce Banner. Also be on the lookout for a WTF cameo by Matt Damon. This is easily the most enjoyable of the Thor movies, but if you are someone who hated Schumacher's Batman movies or Story's Fantastic Four movies, you might have a hard time enjoying Ragnarok. 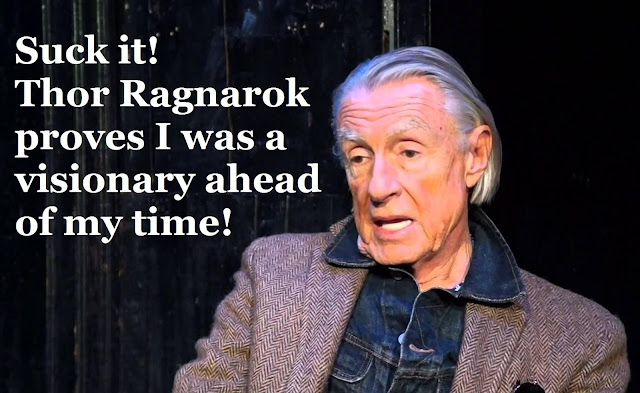 Posted by Shazamaholic at 1:34 PM