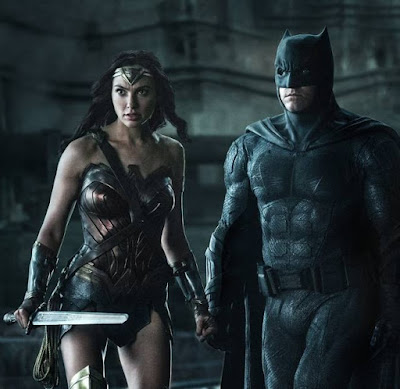 With the fate of the DC Cinematic Universe riding on it, Justice League is successful at being a better and more coherent movie than Batman v Superman, but still falls short of what one would expect to be the epic big screen debut of the All Star team of the World's Greatest Superheroes.  Of course, the problem is that Justice League has been dealt a handicap in that it continues the misfired shared universe sculpted by Zach Snyder, when really Warner Brothers should have abandoned that continuity as fast as they did the original Batman franchise after Joel Schumacher's Batman & Robin disaster.  Instead they decided to forge ahead, albeit bringing in The Avengers director Joss Whedon to take over helming the film in mid-production.  Whedon works a minor miracle by salvaging what could have been another 3 hour Snyder Gloomapalooza.

The film opens with a kid's (Billy Batson?) phone video of Superman. You can clearly see the bad CGI cover up to Henry Cavill's mustache, as his mouth looks like it had a bad reaction to a Novocain injection.  CGI appears to be DC's weak link, as Wonder Woman also suffered from bad, primitive looking CGI.  It doesn't get any better here, as Steppenwolf looks more like a video game image than an actual character, and there are too many moments where the film seems to cease being a live action movie, and turns into The Polar Express.  Even Superman and Batman's flowing capes look fake.

After a pair of really good opening action sequences, one featuring Batman and the other Wonder Woman, the film suddenly grinds to a halt as it drags down for the next 20 minutes or so focusing on introducing Cyborg and The Flash. Things pick up as the plot kicks in - a simple one of Steppenwolf wanting to destroy earth, and Bruce and Diana, reminiscent of The Blues Brothers,  trying to "put the band back together" (I expected Diana to utter "we're on a mission from God"), to stop him. But even after that, the movie has a few dragging moments.  You would think with cutting a movie from 3 hours to 2 hours with much of it re-filmed by a different director, they could have kept the pace up better, but it's not to be. It is also of note that if all the slo-mo scenes in the film were at normal speed, the movie would probably clock in at an hour and 40 minutes. 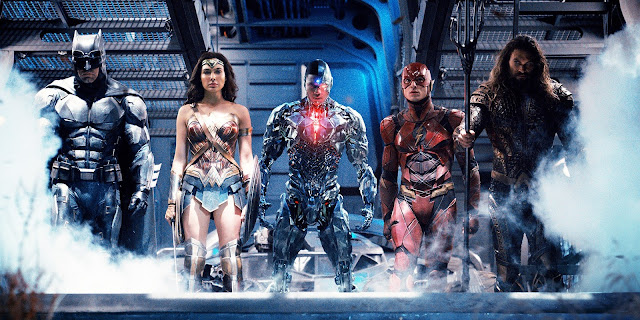 Ben Affleck returns as Bruce Wayne and Batman.  He's not the serial killer he was in Batman v Superman, moving to more traditional take, and Affleck gives a decent performance, although in a couple scenes, he has this look on his face like he's thinking "I'm only doing this for some gambling money".  He's not the best screen Batman, but he's not the worst either.  A big missed opportunity is in the scene where Barry Allen asks Bruce what his super power is, and Bruce replies "I'm rich." That was fine for the trailer, but Whedon should have re-shot it for the film. A much better line would have been if he replied in a Keaton-esque growl "I'm Batman".  Jeremy Irons returns as Alfred, and matches the great performance he gave in BvS. J.K. Simmons is introduced as Commissioner Gordon, but I thought he struck out with the character, small as the role was.  He looked and acted like J. Jonah Jameson with a walrus mustache.

Gal Gadot, so far the MVP of the DCEU, also turns in a fine performance as Diana Prince, although I found her acting slightly more wooden here than in Wonder Woman. I also noticed that she kept giving this pouty smirk that kept reminding me of a Kewpie Doll, and there were a lot of up skirt shots of her - not that I'm complaining.  The chemistry between Bruce and Diana was a high point of the movie.

Ezra Miller was introduced as Barry Allen and The Flash, in a costume that looks more Power Rangers than silver age comic book, and played the role like he was buzzed on some kind of amphetamine.  He had a couple funny lines, but for the most part I found him to be annoying, and by the middle of the movie, I was missing Grant Gustin's version a lot.

Ray Fisher plays Cyborg, and while I thought the early part of the movie devoted to his backstory dragged the film down, in the second half of the movie, he was instrumental to the plot.

Jason Momoa plays Aquaman in a performance that was part surfer-biker dude and part Batman The Brave and The Bold animated series-- though he stopped short of yelling "outrageous".

Amy Adams returns as Lois Lane in a small role.  There was no direct call back to the scene in BvS where the Flash travels back in time to tell Bruce she's the key.  Bruce just kind of knows she's the "big gun" to -SPOILER ALERT- bring the revived Superman back to his senses.  Henry Cavill, to his credit, after two other movies as Superman, finally shows some personality and charisma in the role.  This was Cavill's best performance as Superman.

I also have to mention the musical score by Danny Elfman.  It is the best score in any of the DCEU films (and better than the scores in the Nolan Batman films), and it helps elevate the film.  Hearing refrains of his classic Batman theme and the classic John Williams Superman theme really drives this movie to be better than perhaps it really is. It would have been cool if Elfman worked in a reprise of the original Super Friends theme, but alas he did not.

There are -SPOILER ALERT- two post credit scenes, the second one at the very end of the credits brings back Superman's arch enemy and introduces a certain terminator.

Justice League is a fun movie that is enjoyable when it isn't being dragged down by slow moments or being distracted by inferior CGI. Like Affleck's Batman, its not the best, but its not the worst either.

Posted by Shazamaholic at 2:21 PM

It's funny how you and I can watch the exact same movie and come to completely different conclusions. I thought "Justice League" was one of the worst films I've ever seen. It's almost as bad as "Superman IV: The Quest for Peace." And every single thing that I hated about it can be mapped back to Joss Whedon (whose footage is easily identifiable on a shot-by-shot basis by anyone with a rudimentary understanding of film technique and production) and (presumably) Geoff Johns.

The only things I liked about it was the Snyder footage (which I would estimate to be only 50% (maybe 60%) of the film. It shines. It's beautifully shot, textured and cinematic (as compared to the Whedon footage which looks like flat, poorly framed, sitcom footage of people literally just standing around spouting exposition and cringe-inducingly bad "jokes"). Even the unfinished Snyder footage this weekend (a bunch of Cyborg scenes and a scene of the Flash and Iris West) was beautiful. Cinema is a visual medium. Its central directive is to show, don't tell. Even in the leaked footage (which had no audio), what was happening was perfectly clear and understandable. Snyder is an amazing visual storyteller. Whereas Whedon's footage was just the opposite. It was all talk, talk, talk. I can't articulate clearly enough how incompetently shot Whedon's footage was. As a student of cinema, WB's decision to release his version of this film was shameful.

I'm done with DC. I'm tired of hearing them describe themselves as a filmmaker driven studio when it's clear that they micro-manage everything. I've lost all interest in the Shazam movie. I have no interest in seeing Aquaman now. And I never had any interest in seeing Matt Reeves' Batman movie (judging by his two Apes movies, Reeves is the most overrated (and boring) filmmaker of his generation). The way WB treated Zack Snyder is akin to how they treated Tim Burton after Batman Returns (which I loved almost as much as BvS, and which they also panicked after and ended up leading to the garbage Joel Schumacher films). It's heartbreaking.

I'm genuinely glad that you found much to like in "Justice League." I personally think WB has irreparably damaged their brand for at least a decade with the dumpster fire they released last week. Good riddance to them.

I'm sorry to see Justice League not do well at the box office. I thought it was right up there with Wonder Woman as the best DCEU movie to date. I agree there were some slow spots in the first half of the movie, and the bad CGI was inexcusable (perhaps even sabotage if one leans into conspiracy theories), but over all Joss Whedon made a silk purse out of Zack Snyder's ear. I loved Danny Elfman's score, and cannot understand the hate for it. When the classic Batman and Superman themes played, it was such a YES/fist-pump moment. It's sad that the DCEU seems to attract such an angry toxic fandom. But that won't stop me, and shouldn't stop anyone else, from enjoying this movie.