The first pic of Zachary Levi in costume as Captain.... Shazam has surfaced.  True to form, it looks very New52, just like everything else in this movie is turning out to be.  Yep, there's even that damn hoodie. 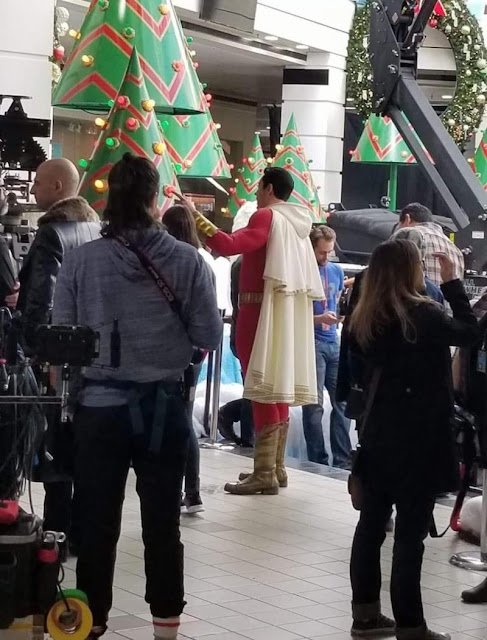 UPDATE: another shot, this time of the front has surfaced.  The front seems to look just like the Justice League War cartoon... or maybe Robin William's Mork costume.  Not quite sure. 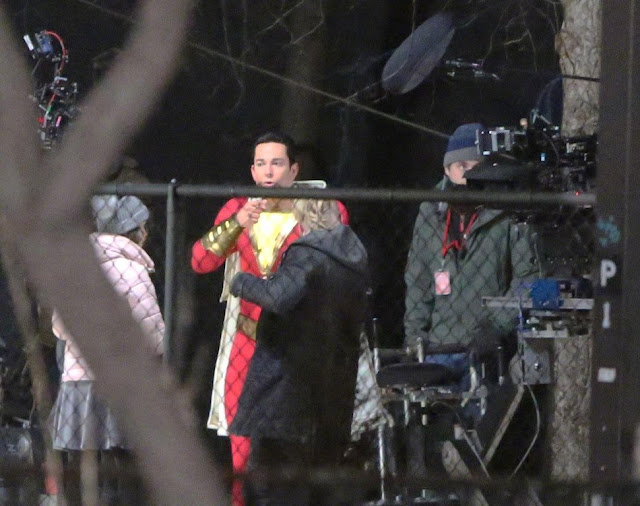 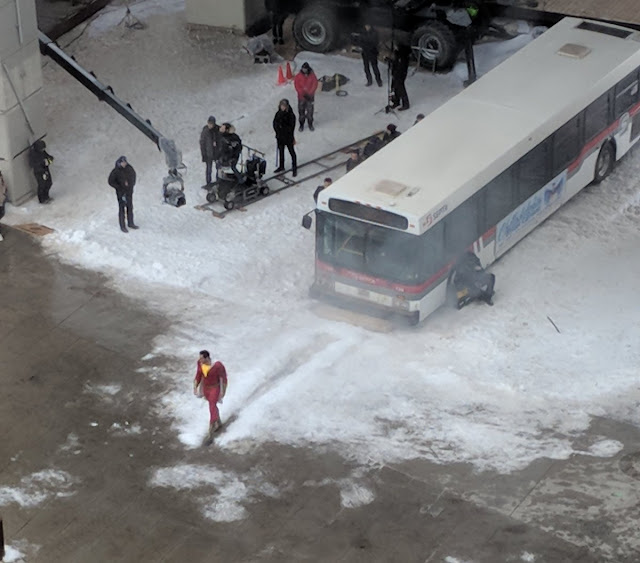 ANOTHER UPDATE: Even better, hi-res pics have surfaced. 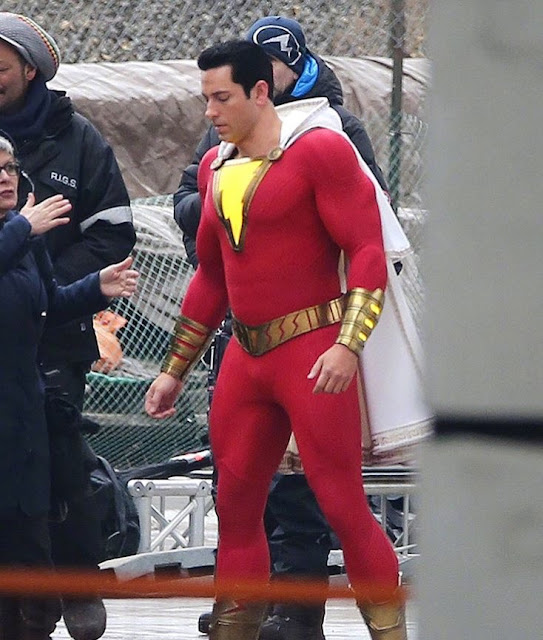 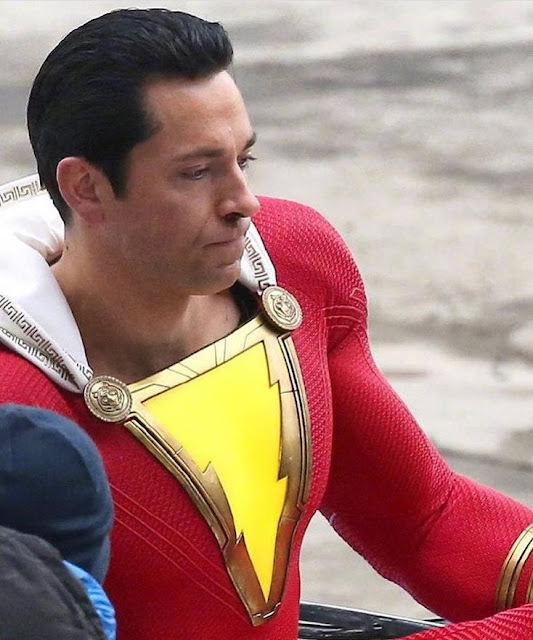 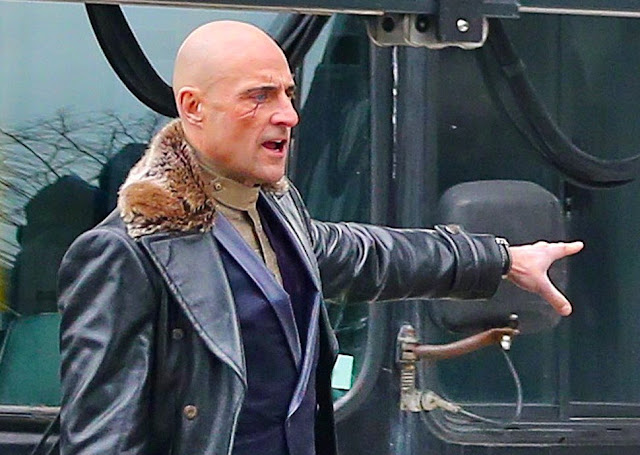 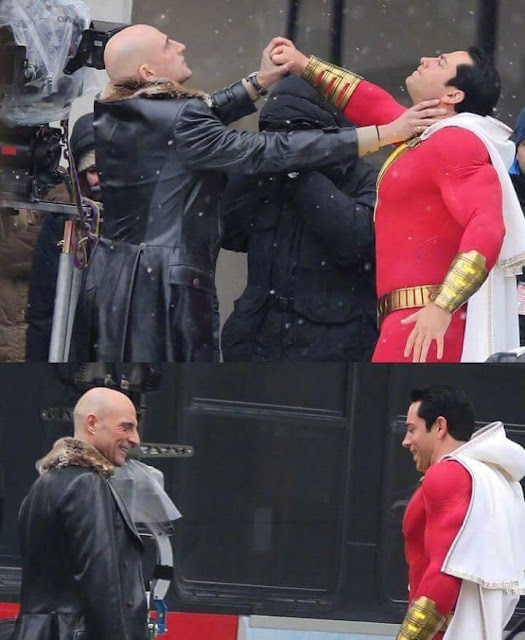 And Jack Dylan Grazer as Freddy Freeman.  Wonder if his hair is dyed blonde like New52 Freddy? 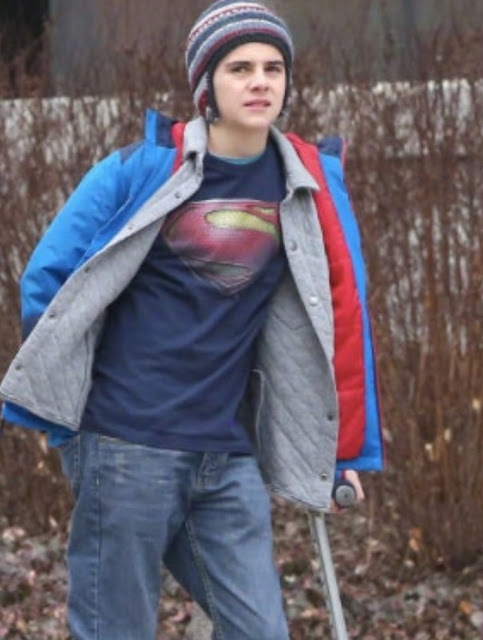 Posted by Shazamaholic at 12:58 PM

I'll reserve judgment until they release the official photo, but the fabric looks so...flat. It looks like a costume from circa 1985. Like a variation on Christopher Reeve's Superman costume. Maybe even one of Jackson Bostwick's Captain Marvel costumes from the 1970s. And his hair looks so artificially black.

I was telling a friend about a year ago that one of the best developments in modern super-hero movie costume design (and I give credit to Sam Raimi and his designers on the original Spider-Man film) is how textured the fabrics are now. I loved Michael Wilkinson's costume designs for Zack Snyder's DC movies. Even thought I'm not a huge Marvel fan, I love the look of the MCU costumes (especially Doctor Strange, and I didn't even really like that movie all that much).

This costume (and again, I reserve the right to change my mind once they release the official photo) seems so old fashioned. And not in a good way.

I have to say when I first saw Captain Marvel's movie costume I was disappointed. I was hoping for his classic look. Classic cape, boots, and bolt would have been my way to go. However, I am glad it doesn't look like an armored up Justice League costume. Definitely not the look that Cap needs to have. Honestly,the more I see the simple, fun look of the suit, the more it grows on me.
Truth is, more importantly than getting the suit right, they need to get the character right. Billy has to have a sunny outlook and pure heart. Cap has to maintain an outward appearance of hero using the wisdom of Solomon, all the while about to explode with excitement on the inside from saving the day as a kid at heart.
So if we get a new or different look from what we wanted, but classic character with great story, I think we'll all be happy. Maybe even get to hear kids and adults saying, "SHAZAM" with excitement again.