Batman-News.com posted the official Shazam! press release which answers some questions, and raises some concerns.
We all have a superhero inside us, it just takes a bit of magic to bring it out.  In Billy Batson’s (Angel) case, by shouting out one word—SHAZAM!—this streetwise 14-year-old foster kid can turn into the adult Super Hero Shazam (Levi), courtesy of an ancient wizard.  Still a kid at heart—inside a ripped, godlike body—Shazam revels in this adult version of himself by doing what any teen would do with superpowers: have fun with them!  Can he fly?  Does he have X-ray vision?  Can he shoot lightning out of his hands?  Can he skip his social studies test?  Shazam sets out to test the limits of his abilities with the joyful recklessness of a child.  But he’ll need to master these powers quickly in order to fight the deadly forces of evil controlled by Dr. Thaddeus Sivana (Strong). 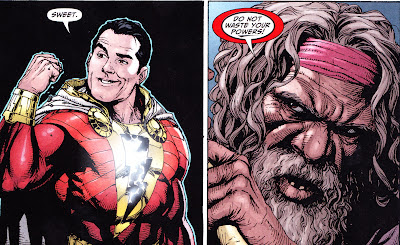 It goes on to confirm previous rumors Ron Cephas Jones has been cast as the Wizard. It confirms the movie will feature the New52 Shazam, and not the classic Captain Marvel. While most of the Curse of Shazam characters are mentioned, no classic Fawcett characters, like Sterling Morris, Beautia, Uncle Dudley, etc., are even hinted at.  Billy is referred to as "streetwise", which may be code for the New52 jerk character, perhaps slightly toned toned down.  Expect Billy's catch phrase to be "bad ass" instead of "Holy Moly". Of course the very purpose of this film seems to be getting a superhero version of Big made at any cost.  The whole "have fun with them" line seems like a big chunk of the movie will be a blend of the "discovering his powers" scenarios from both the William Goldman and John August scripts, and the New52 scenes where Shazam and Freddy try to find beer money and pull pranks, and emphasizes Shazam will be reckless with his powers. Although David F. Sandberg was quick to renounce the idea of Sivana as a sorcerer, Mark Strong's comments about Sivana flying and shooting lightning from his hands, and this press release stating he can control deadly forces of evil (read: Seven Deadly Sins) indicates otherwise. The release emphasizes the film is firmly set in the DC Film Universe, and considering Sandberg not renouncing the reports Henry Cavill will appear in the film as Superman, signs point to that happening.   Maybe Zachary Levi will get his wish and Gal Gadot's Wonder Woman will also have a role.  And Margot Robbie's Harley Quinn should definitely be in it, considering the chemistry between Billy and Harley in the Injustice comic book series.

All in all, it looks like this movie will be a hybrid of Big and Curse of Shazam with a Spider Man Homecoming vibe, and those of us who wanted an adaptation of the Fawcett material with an Alex Ross spin are S-O-L.

Posted by Shazamaholic at 9:53 AM