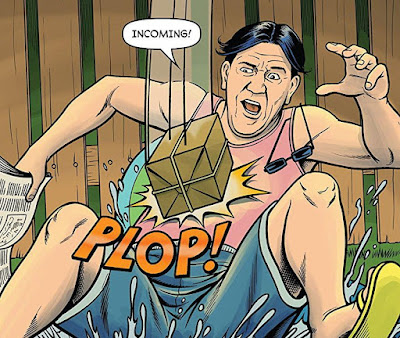 The latest Three Stooges one-shot published by American Mythology has Shemp front and center. However, instead of doing a story with the Moe, Larry and Shemp line up, what we are really getting is more along the lines of one of Shemp's solo shorts made at Vitaphone, and later, at Columbia.  The plot deals with Shemp thinking the boys have been abducted, and his madcap search to find and rescue them. The script by S.A. Check is slightly above average, somewhat hampered by the consistent asides illustrating to the reader that this is set in today and not the 1940s. The art by Brendan and Brian Fraim is superb, as usual, and there is a tiny reference to Ted Healy and it looks vaguely like Agent Truman is based on Adam West, who co-starred with the boys in The Outlaws IS Coming.  There is only one new story, as the issue is filled out with two reprints written and drawn by Norman Mauer that are excellent. This issue earns a B.
Posted by Shazamaholic at 1:36 PM