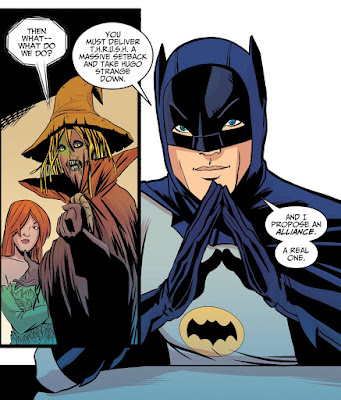 The final issue of this miniseries begins with our heroes still trapped by the octopus. Hugo Strange then puts them back into brainwashing for several days.  The heroes seem to be moving toward compliance. But then Batman plays a recording he made of the brainwashing sessions where Strange tells the heroes they will be officers in his cause and the villains will be their henchmen.  The villains get upset over this. (Why? Most of them are C and D listers who make better henchmen than supervillians anyway.) One glaring mistake in the script has Mr Freeze referring to himself as Victor Fries.  The 1966 Freeze's real name was clearly revealed as Dr. Shimmel on the series. Batman and the others then bamboozle the villains into an alliance to take down Strange.  As the alliance's plan begins to unfold, Strange brings Batman back into a brainwashing session, and tries to get him to reveal his true identity. (Why not just take off his mask?) But it's Poison Ivy to the rescue, as the plan goes into effect, as Batman turns the brainwashing device onto Hugo, and Solo and Kuryakin take out Hugo's men. But then the villains double cross the heroes as they leave the THRUSH base.  Giving chase via submarines, the villains seem to be escaping until Kuryakin reveals, as a precaution, he let Hugo's giant octopus escape, where it has detained the villains' sub. Jeff Parker's script seemed to slightly run out of steam as the story reaches the end. There is a nice exchange between Batman and Solo, where Solo suggests using the Bat-Submarine's nuclear engine to destroy the THURSH base, but Batman protests as that would kill several people.  There is a sly ending, where Solo and Kuryakin hint that they know Batman's Bruce Wayne mask was a ruse, and that he really is Bruce Wayne. Pasquale Qualano drew the first half of the book, with David Hahn drawing the second half.  Both turned in excellent renderings, with Qualano's half having a slight Neal Adams look. This final issue earns a B-.
Posted by Shazamaholic at 11:27 AM